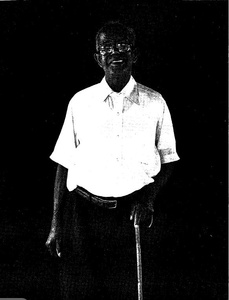 Jim Buckley was born in 1898. "I was raised up on a farm. The little town closest to it was Oakville, Mississippi," he noted in a 1984 publication. He worked briefly in a sugar refinery in New Orleans -long enough to earn money to have his teeth pulled - after which he went to Jackson, Mississippi, to be near his family. For a while he worked on a farm again, then he worked with an "extra gang" on the railroad. "That's how I came up here. We went to Chicago, and Iowa, and we had a camp in Champaign." After leaving the railroad, he helped build houses in Champaign, then he washed dishes in a cafe on campus until his retirement. "I like everywhere I lived pretty good;' he says, but he's always been especially fond of "farming. I always liked to farm." He also notes, "I had to work cheap, but I got by. The man wasn't payin' much, but I got by all right."
He now feels, "I'm proud to be 86 years old. I worked hard all my life. I thank God every day that I don't have to work that hard now! I feel certain that I will have all that I will need for the rest of my years. I don't worry much about anything. I hope other old folks don't have to worry how they'll get along." His only concerns are that "I can't do like I used to. I'm kind of feeling my age."