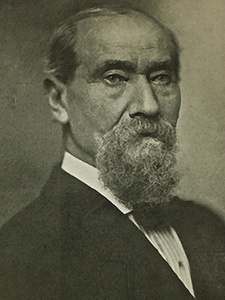 Joseph Kuhn opened one of the first department stores in the Champaign-Urbana area in 1865 and there has been a Kuhn's clothing store in downtown Champaign ever since. Most of the Jewish immigrants who settled in the United States around 1848 came from Germany, including Joseph Kuhn. One of the reasons Joseph moved from Frankenthal, Germany to the United States was because he did not like the way military recruits were treated. Joseph arrived in America on April 6, 1852, with a bag, a featherbed, and $2.00. He lived in New York for two years before moving to Mississippi to live with his brother-in-law and sister. During the Civil War, he served in the Confederate Army for two years before he deserted and gave his word of honor to the Union. In 1865, Joseph met and married Lena Loeb from Louisville, Kentucky. After a short stay in Lafayette, Indiana, Joseph and Lena moved to Champaign where their seven children, Isaac, Arthur, Sarah, Lida, Rudolph, Rosetta, and Leopold were born.

For a short time, Joseph Kuhn's first store was advertised as the Clothing Emporium of Kuhn & Jakobs; a little later Jakobs no longer was printed as part of the store name. Joseph and Lena Loeb Kuhn lived above
the store where their son, Isaac, was born in 1866. The next store Joseph owned at 45-47 Main Street was one of the largest at that time. In an old City Directory, we found out that the store was called Star Clothing Store. In 1872, the store was partly destroyed by fire and the rest of the building was dynamited to stop the fire from spreading. The third store, Jos. Kuhn & Co., was built at 33 Main Street by Isaac Kuhn in 1908 and still stands today. The store's motto which you can read on the back of the building says, "Unmatched in 118 -1/2 Miles."

In 1888, Joseph's son, Isaac, went into partnership with his father and then took over the business when Joseph retired. Joseph was still interested, though, and spent time at the store. On the evening of December
27,1915, Joseph died at the age of 78 after spending a full day at the store. His funeral was at Sinai Temple where a plaque on the wall says that Isaac Kuhn served on the Board of Trustees. Joseph and Isaac were both involved in many civic activities. Isaac was often called "The man who made Main Street" because he helped the development of downtown by encouraging businesses to build stores and pave sidewalks. Isaac was active in his support of the YMCA, the USO, the Hillel Foundation, and other organizations. Isaac also published a book made up of articles about Abraham Lincoln he had collected over the years. The book was titled Abraham Lincoln, A Vast Future. The Lincoln Building across Main Street from Jos. Kuhn & Co. built by Joseph and Isaac Kuhn in 1915 reflects the family interest in Lincoln. Jos. Kuhn & Co., was owned by Dr. William Youngerman as of 1992, Joseph Kuhn's great-grandson. Charles Tapscott has worked at the store since 1938. The store continues to display antiques that were used in the store in the past, like an old typewriter and an old sewing machine. Right next to the antiques, there is a wall of pictures showing people, old stores, and newspaper clippings.