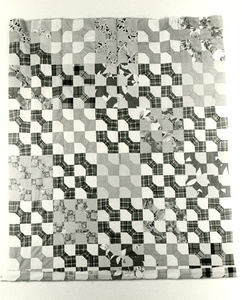 Landau Cannon Butler was born July 13, 1908 at Corinth, Mississippi, and died May 19, 1990 at Champaign, Illinois. She was the daughter of Hattie Fry. Landau Cannon Butler made many quilts over a period of years. The two unquilted tops shown here were made from tiny pieces saved from sewing the family's clothing. She was featured in the Covering our Heritage: African-American Quilts of Champaign-Urbana exhibit held at Krannert Art Museum in 1994. Landau Cannon Butler's daughter, Ethel Bridgewater of Champaign, recalls that her grandfather Fry was a minister and that the Frys' nine children grew up with strong family values. Mrs. Bridgewater remembers adding some small squares to these tops herself as a child. Landau Cannon Butler, made the striking applique quilt alone. She created the red applique motif by cutting folded paper to make a pattern. Mrs. Bridgewater later had the top quilted at Douglass Annex.