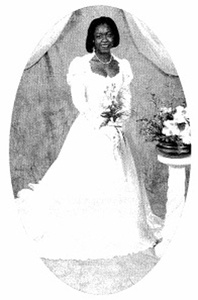 Lashonna is the daughter of Bobby and Robert Miller II. She attended Champaign Central High School where she was treasurer of the African-American Club, a member of the Art Club, the Diversity Choir, Delteens, the cheerleading squad, Student Council, and captain for both basketball and track teams. Lashonna planned to attend Millikin or Western Illinois University after graduation and to major in Education. She has been an Honor Roll student for seven semesters, was the recipient of the American Legion Oratorical Award, and named as an Urban League Youth Summer Employment Outstanding worker.  Lashonna was a member of Indian River High School Homecoming Court in 1994. She was presented Central High School's Most Improved award for 1998, ranked third in the Big 12 for the Shot Put, with a personal best of 36' 10 Yz", and ranked fifth in the Big 12 for the 100 meters, with a personal best of 12.8 seconds in 1998. She was an employee of Champaign Unit Four schools and County Market. Her escort was Randy Walker. Lashonna was presented by her father, Robert and received by her mother, Bobby.