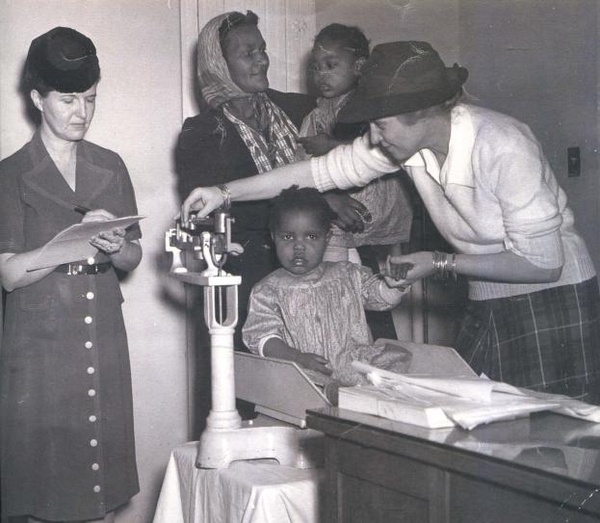 A scence from Mercy Hospital, undated. This photograph comes from the Doris K. Wylie Hoskins Archive. Please add additional information about this photograph. 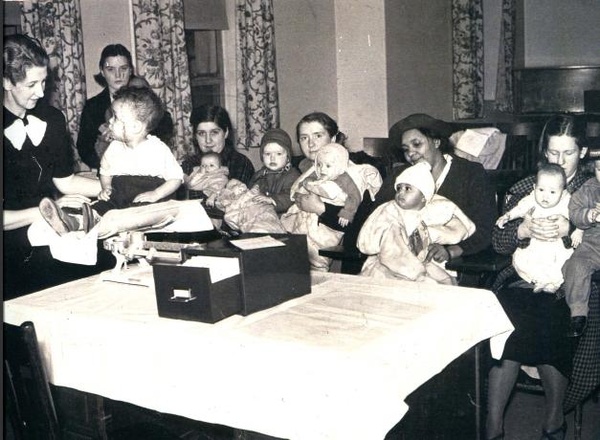 From a frame house at the corner of Fifth and White Streets in Champaign in 1919 to an eight-story (266 bed) facility at 1400 West Park Street, Urbana, Mercy Hospital made tremendous strides and progress in  fulfilling the Mission of the Servants of the Holy Heart of Mary in Central Illinois. The Hospital was built because of the desire of a citizens group and the dream of Father R.J. Flynn, to have a Catholic hospital in Champaign-Urbana. The impetus seemed to have been the Spanish flu epidemic in 1919. At that time there was only one hospital in the twin cities, Burnham City Hospital, located in Champaign. Father Flynn and the Citizens Committee worked together toward the achievement of their shared goal. While the Committee sought to raise funds, Father Flynn procured a site for a temporary hospital. The Wendt property at Fifth and White Streets was purchased and remodeled for a temporary hospital accommodating 14 patients. In January, 1920, its doors were opened to the community. The Benedictine Sisters, who were then teaching at St. Mary's School in Champaign, volunteered to help staff the hospital until a Sister of Mercy of Dubuque was recruited to provide temporary leadership. Meanwhile, Father Flynn did not lose sight of his original dream. In 1921 a popular subscription drive to raise funds for a hospital was launched under the direction of A.M. Burke and Mrs. J.M. Kaufman. Half of the money needed for a modern hospital, $150,000, was raised in the drive. Construction of a new hospital building on the West Park Street site was completed two years later. When it opened, the house at Fifth and White Streets was no longer needed as a hospital. The name chosen for the new facility was Mercy Hospital. It was time to find Sisters to staff the fledgling hospital. Father Flynn, while a seminarian at St. Viator's Seminary, was nursed back to health by the Servants of the Holy Heart of Mary who staffed St. Mary's Hospital in Kankakee.

In 1928, with the great foresight of Mother St. Louis' leadership, the hospital opened a school of nursing with two students and three years later the school held its first graduation exercises. Before the Mercy Hospital nursing program was phased out in 1970, the school had graduated more than 500 nurses. Additions were made to the hospital plant in 1941, 1949, 1963, 1975 and 1980. In 1950, Sister Mary Gabriel was named to succeed Mother St. Louis as Administrator and she served in that capacity until her retirement in 1972. She was followed by Gabriel Stoll who became the first lay President of the Mercy Hospital Corporation and served until his death on pecember 16, 1977. From January 1, 1978 to January 1, 1984, Ronald R. Aldrich served as President of Mercy Hospital. On January 1, 1984, William Casey was appointed President and Chief Executive Officer of Mercy Hospital.

Since 1926 Mercy has continued to expand and improve and now offers both primary and tertiary care. Mercy Hospital is approved by all appropriate accrediting and licensing bodies and is fully qualified to offer a broad range of medical, surgical, pediatric, obstetrical, psychiatric, rehabilitative and hospice care services. The hospital shares in the healing ministry of the Church. Its presence in the community witnesses to the value and dignity of human life. Services given and programs offered are marked by Christian love, free of discrimination relating to race, creed or economic status. Mercy Hospital promotes wellness concepts with inpatients, ambulatory patients, employees and the community through health education and outreach programs. The hospital has a firm commitment to the education of health care personnel and is a major affiliate of the University of Illinois College of Medicine. The hospital fosters clinical research in collaboration with the University of Illinois, other educational institutions, and the Mercy Hospital Division of Servants United Foundation. Cooperation and sharing with other health care organizations is encouraged and promoted both at the local and the system levels.

Development of the ServantCor System

On December 6, 1982, after a year-long study, the ServantCor system, sponsored by the Servants of the Holy Heart of Mary, came into existence. The development of the system originated from a desire on the
part of the Sisters to continue the provision of Catholic sponsored health care. ServantCor is a human services system established to coordinate and direct those health related apostolates specified by the Servants of
the Holy Heart of Mary. ServantCor is the parent for institutional-based health care apostolate at St. Mary's Hospital, Kankakee; Mercy Hospital, Urbana; Our Lady of Victory Nursing Home, Bourbonnais; and St. Anne
Center, Rockford. ServiceCor, Inc., directs diversified ventures such as Servants United Foundation, VentureCor, Crouse Printing and Henson Ambulance. On January 1,1984, Ronald Aldrich was appointed first President and Chief Executive Officer of ServantCor. Joseph Feth succeeded him in July, 1985. Offices for the ServantCor System are located at 175 South Wall Street, Kankakee. Management provides leadership, characterized by a spirit of justice and respect for individuals. It encourages staff at all levels to assume responsibility for performance and to take pride in accomplishment.

On February 10, 1989 a Memorandum Of Understanding (M.O.D.) was signed by Champaign's Mayor Dannel McCullum and ServantCor President, Joseph Feth as well as Dr. William Cooper of Christie Clinic and Dr. Lewis Trupin for the Independent Physicians. This document lays out the conditions for the merger of Mercy Hospital and Burnham City Hospital into a new hospital. The merger process will necessitate a good portion of time, perhaps as long as two years to be fully accomplished.