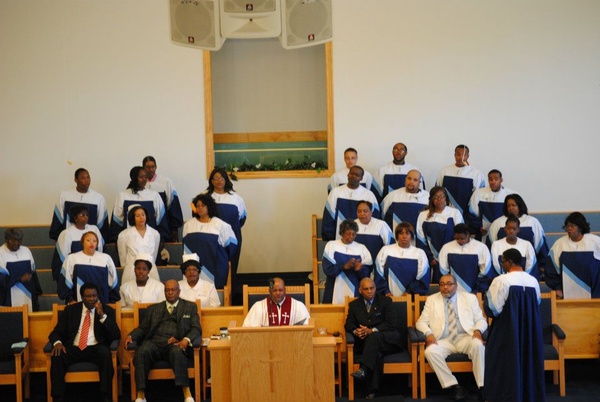 Mount Olive Missionary Baptist Church is the fourth oldest continually existing African-American Church in Champaign County, Illinois. It is colloquially known as "The Mountain" and is a pillar of the community.

On March 16, 1916, the Mount Olive Missionary Baptist Church was organized by Reverend D. J. Tyler, assisted by Amelia Tyler, Tolie and Eva Nunn, Morgan and Nora Knox, all of whom were former members of their sister Church, the Compton Hill Missionary Baptist Church of St. Louis, Missouri. The original church began with prayer meetings in the home of Tolie and Eva Nunn at 1110 North Fourth Street and spread from house to house; including neighbors and friends. The prayer band grew in numbers. Recognizing the need for a church, Sister Eva Nunn, with the consent of the prayer group wrote to Reverend D. J. Tyler, inviting him to come to Champaign and help organize the Church. He responded immediately and came to Champaign, called a Council meeting consisting of himself, the Reverend Owen and Reverend Rivers of the Salem Baptist Church, other missionaries and friends and began to make plans for organizing the Mount Olive Missionary Baptist Church. Their first priority was to acquire land on which to build. They were able to purchase two houses located on a lot at 1111 North Fourth Street from Alexander Lumber Company. This made the vision become reality and the Church’s membership began to increase. The first Pastor was Reverend D.J. Tyler, the first Deacons were Brothers Tolie Nunn, Morgan Knox, Johnny Sykes, Aden Williams, Jesse and Claude Britt and Sylvester Hampton. The members carried chairs from their homes to sit on and donated coal from coal sheds to provide heat. Everyone went to Sunday school, Prayer Meetings and all joined in to help whenever and wherever needed.

The old church at 1111 North Fourth Street, or the Church “up in the field” as it was lovingly referred to, grew and prospered under the ten pastors who followed its founder Reverend D. J. Tyler. In 1958, the Reverend J. E. Graves came and, under his leadership and support of the membership was able to buy the land at 808 East Bradley and build the present sanctuary building and purchase and remodel a parsonage. In 1969,  Reverend James Offut became the pastor and the church was able to pay off the mortgage and purchase a new parsonage. The Pastor, Reverend Lundy Savage, a true visionary as well as being a dynamic pastor was successful in expanding the ministry to include preaching, teaching and evangelism, all of which is reflected in the development of a College Student Ministry, and youth-oriented programs to encourage them to
participate in the ministries so necessary for their development as our leaders of the future. All of these programs commanded more space and Pastor Savage was very successful in bringing about the expanded sanctuary; the building of an Educational Section which includes a Pastor’s Study, 12 Classrooms, Church Office, Women’s Lounge, Men’s Restroom, a modern state-of-the art kitchen and Parish Hall.

From 1916 to the present, the Mount Olive Missionary Baptist Church stands as a monument to a community of faith from the small church “up in the field” at 1111 North Fourth Street to its present location at 808 East Bradley. Its history is ongoing. Kathryn Britt Humphrey is among those who are part of its history. Her parents, Jesse and Vennie Britt, were founders of the original church. Her father was a Deacon and her mother a devout member. Kathryn became a member at a very early age and has been active in many ways up to the present time. Mrs. Juanita Campbell, mother of Juanita Mason, also a member of the church. “Mother” Campbell, as she was called by all who knew her, was very active in the church as well as in the community. Her love of people was exemplified by her interest in them and this love endeared her to all who knew her. Many more members, both older and young and too numerous to mention, still contribute their time and energy in supporting their beloved Mount Olive Missionary Baptist Church.

Source: Through the Years, issue Spring 2002, available at : http://eblackcu.net/portal/items/show/51