The Orpheum Children’s Science Museum is an educational institution in Champaign that provides camps, after school programs, classes, special events, exhibits and field trips, in addition to birthday parties and facility rentals. 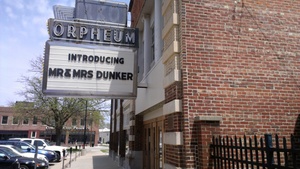 1914: The New Orpheum Theatre opens on October 19th, as both a vaudeville theater and a “moving picture” house. All the great stars of the Orpheum Theatre Circuit played Champaign, and it was considered the finest theater in downstate Illinois.

1986–1990: The Theater closes in 1986 and stands vacant until 1989, when the Preservation and Conservation Association (PACA) begins its campaign to save the theater. PACA hires theatre consultant Michael Hardy to do a feasibility study of the Orpheum.  He suggests, in July 1990, a children’s museum as a possible use for the building. The Champaign-Urbana area does not have a children’s museum and there are already several successful performing arts facilities in the area.

1992: The Discovery Place, Inc. holds its first board meeting on February 5th. The first Discovery Place fundraising/publicity event—a Kids Building Fair—is held on June 20th in the parking lot in front of the Orpheum. The Champaign City Council votes to approve the sales contract of the Orpheum Theatre building to The Discovery Place, Inc. on July 7th. The first major fundraising event—“Bids For Kids,” a fine arts and antiques auction—is held in the Robeson Building on November 20th.

1994: The grand opening of the new children’s science museum in the storefront space takes place on December 27th. Two hundred-eighty people attend the first day and over 1500 visit during the first week of operation. This year marks the 80th anniversary year of Champaign’s New Orpheum Theatre.

1997: The museum’s name is changed in April to “The Orpheum Children’s Science Museum” to better reflect the heritage of the building.

2000: Phase II remodeling is completed in October. The entrance lobby, grand foyer, and mezzanine are restored for use as exhibit spaces.