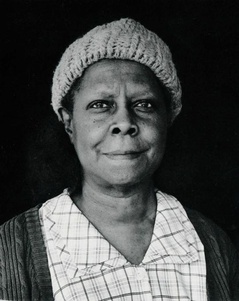 In 1920, when she was seven years old, Mrs. Nesbitt carne to Champaign from her horne in Homer, Illinois, "because we wanted to live where there were other Black people. We were the only Black people in Homer." For many years her husband worked at the Inman Hotel. They raised ten children (five boys and five girls). When she carne to Champaign, Mrs. Nesbitt recalls, most streets were unpaved and the North End was all white, mostly German.