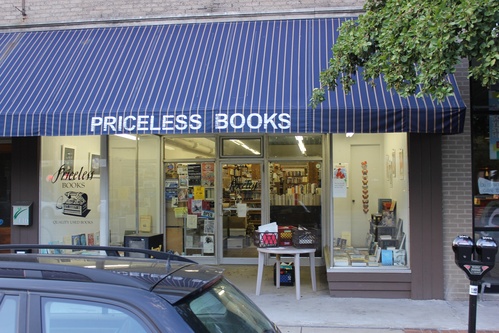 Locally owned store that buys and sells used books, textbooks, rare books (including first editions and obscure texts), sheet music, and CDs. It can be found on Urbana's West Main Street, next to Heel to Toe. Priceless Books is a well-known hunting ground for surprising literary gems.

Before he moved to Urbana, Bill Thornhill along with Mike and Leslie Vaillancourt had discussed opening a used bookstore for, according to Bill, dozens of years. Priceless Books officially opened it's doors in 1993, and is currently in it's twentieth year of business. Notable sections include literary and cinematic criticism, history, dictionaries (including bilingual versions), and cookbooks.

​ As of early 2013, Priceless Books has approximately 40,000 books in stock. The inventory has a high turnover rate. Take your time, and be ready to browse for a few hours with an open mind, and it's very difficult to leave disappointed. Paying with UC Smiles earns a 10% discount.