This page contains documentation of racism at the University of Illinois. Please add additional stories and information. 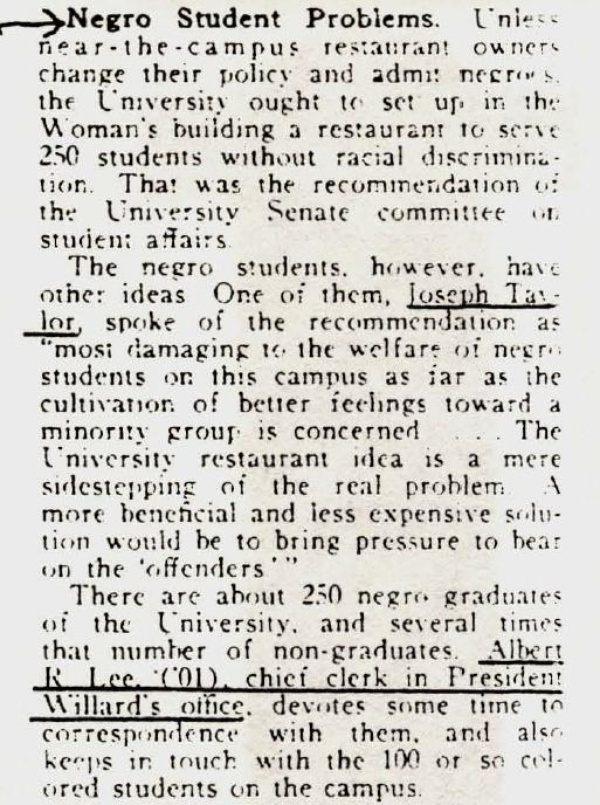 This article discusses the problems of basic survival among African-American students at the University of Illinois in the 1930s. No restaurants apparently would serve black students in this time period. Source: Illinois Alumni News, July 1937, volume 15, no. 10, unpaginated.

In Spring of 2014, there was an outcry after some students posted racist Tweets when Chancellor Phyllis Wise sent out an e-mail stating there would not be a snow day. Many tweets involved racial slurs regarding Wise's Asian heritage.

To learn more about this incident, click here and here.

From 1926 to 2007, the UIUC mascot was Chief Illiniwek, a depiction of a Native American. Since the 1980s, members of the Native American community at UIUC as well as outside organizations (including the NAACP, the National Congress of American Indians, and the National Indian Education Association) have been working to remove the offensive mascot. In 2007, the board of trustees voted to retire Chief Illiniwek, effectively changing the UIUC mascot to the Fighting Illini.

Images of Chief Illiniwek are still depicted on many unofficial UIUC merchandise/clothing, and his image is used as a logo for "Unofficial." In 2015, the Daily Illini published a four-part series about Chief Illiniwek's lasting presence on campus.

In November 2015, Black students held a rally on the Quad in solidarity with the Black students at Mizzou. Shortly after rally, a Facebook group entitled "Illini White Student Union" emerged (it is unknown who created this page) with the stated intent of organizing against "anti-white terrorism caused by Black Lives Matter activists." The page encouraged students to post pictures and personal information about Black protestors so the group could identify "anti-whites." The UIUC administration responded to the threatening posts by contacting Facebook to have the page removed.

In the Daily Illini

In October 2015, the Daily Illini published a Halloween-themed comic that depicted a man climbing over a fence and declaring that he was going as an "illegal immigrant." In response to an outcry from Latino/a/x students on campus, the Daily Illini issued an apology.