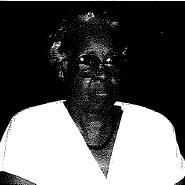 Rosie Thomas Anderson, undatedRosie Thomas Anderson was born June 26, 1919 in Dundee, MS (deceased August 4,2001). She moved to Champaign to join her husband the late Albert B. Anderson in December of 1935. At that time she had one child and the remainder of her children were born in Champaign. She had a total of 10 boys and 8 girls, of which 16 are still living. She was a housewife until she started working full-time at the University of Illinois in 1963. She raised part of the family at 313 E. Bradley until urban renewal came through. At that time she, along with the 9 children that were still at home moved to 113 W. Stanage in Champaign. Although, she had a lot of children to some people, she always had room for her grandchildren. She loved them all and took care of them. She raised them with a firm hand and saws to it that they all attended church and school. They all grew up to be respectful and productive adults with families of their own.