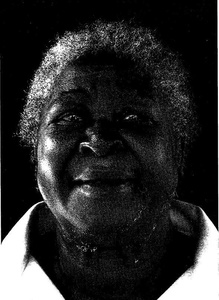 Originally from Pulaski, Illinois, Mrs. Ray lived in Champaign beginning in 1931, when she was 17 years old. "I've done a little of everything. I've cooked. I was a maid," she remembered in 1984. She also raised her four adopted children, "from six years up, until they graduated from high school. One boy is a minister; one girl is a principal in New Orleans. Another is a secretary and the last daughter sings with an orchestra in Champaign." She remembers "scraping and scrambling to get that house. We got it during the time of the Depression. My husband wasn't making very good money and neither was I."