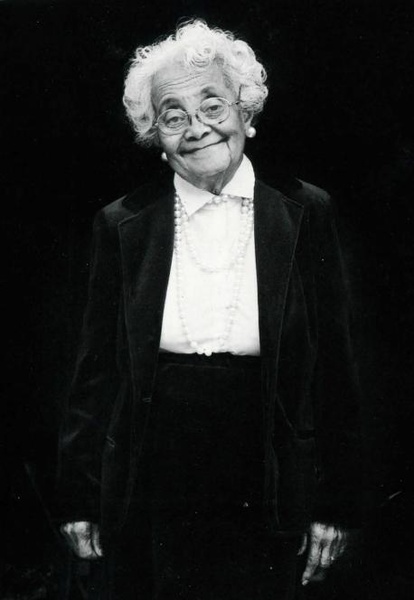 Sarah Scott was active in the community and in her church. She worked diligently on the committee to provide equipment for the new Douglass Center built in 1945. She was an active member of the Willing Workers Club of Bethel A.M.E. Church. Her desire was to live to be 100 years of age in order to receive a letter from the President of the United States. She missed it by 6 months. She was still proudly living alone at her death. She is the mother of Erma Bridgewater.

She was a charter member of the National Council of Negro Women, Champaign County section.

The following text comes from a 1983 biography of Scott:

"Now 91 years old, Sarah "Muddy" Scott came to Champaign in 1911. "My dad died and I went to live with my aunt while my mother came here to find work. Then she sent for me." Her fondest memory is of meeting Alice Lee Pope with her mother at the train station when she first arrived in Champaign. For nearly fifty years Mrs. Scott did housework. "I raised my two children when it was very hard to do so. They grew up and had children and raised my grandchildren well. My grandsons are famous jazz people." She was dubbed "Muddy" when her son couldn't quite pronounce "mama." She is now affectionately known by the nickname not only to her family, but her many friends in the community. When she first came to Champaign, she recalls, "There was a lot of segregation. You couldn't eat anywhere in town but the Illinois Central railroad station. They had a cafe, but Blacks had to stand or sit at a bar. They couldn't sit at a table."

Sarah Ann Pauline Scott, nee Wilson, was born at Shawneetown, Illinois in 1892. Her mother, a housewife, was born in Mississippi. Her father, a farmer, was born at Shawneetown in 1862 (died 1910). She was married to Ray Scott (1892-1957), and they had two children. She moved from Shawneetown
to Champaign in 1912. She worked as a maid. She was a member of Bethel AME Church, where she has served as a Stewardess and in the Willing Workers Club. Her affiliations have included the NCNW and the OES.

and Raymond Bial's In All My Years: Portraits of Older Blacks In Champaign-Urbana, Champaign County Historical Museum, 1983.