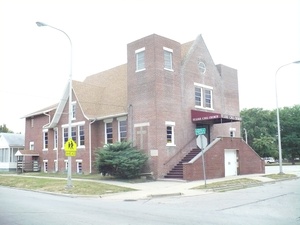 There was no church in Champaign and Urbana connected with the C.M.E. Conference in the early Twentieth Century. A family from Kentucky, namely Mother Hopkins, Sister Pickens, Sister Tisdale, Brother Tisdale and others of that family formed the church, which was headed by Rev. W. M. Townsend. In 1909, a little band of faithfnl workers began holding services in a store house in Urbana, Illinois. And persons inquiring as to what new denomination was springing up in their midst were told it was a C.M.E. mission. The title was known to some, others had never heard of it, and a large number predicted it would not succeed. However, the Supreme Judge who rules over all continued to guide and direct this little band and, as on the day of Pentecost, added daily to the church such as should be saved. The Mission continued to grow and the seed had fallen upon good soil and came forth, and the Holy Father directed the minds of this praying band to look forward to later purchasing property wither this Temple might be erected in His name (St. Luke C.M.E. Church).

CHURCH BUILDING
St. Luke was built by its own members, and through their hard work and labor it has become one of the greatest churches in Champaign/Urbana, Illinois. Originally (1909) it was located on the corner of Eads Street in Urbana in a small storehouse. It was then called the C.M.E. Mission which was new to the community. The mission grew with the purchase of more property and a name was given - Saint Luke Tabernacle Colored Methodist Episcopal Church (renamed in 1954 to Christian Methodist Episcopal). In 1914 the group moved to the present location at 809 N. Fifth Street in Champaign. The design of this structure was of a twin-tower type building. It resembled Salem Baptist Church. According to the cornerstone, the church was constructed by Reverend Whitsitt. The earliest legal records of St. Luke were found among the archives at the City Building and the Deeds Office in Champaign and Urbana where it was listed as the Colored Methodist Episcopal Church of the North End Subdivision. (See the copy of the deed on pages 20-21.)
The church was bought from a widower by the name of John C. Coler who lived in Champaign. He sold the property for $1,000.00.The church congregation paid $500.00 as a down payment on April 5, 1910, and the balance was due by April 5, 19I3 with an interest rate of 6 % per annum from October 5, I9I2, also subject to taxes and assessments levied on imposed land. The church is located on Lot One (I), Block One (I) in the Vredenburgh's Subdivision on the South part of the Northeast quarter of the Northwest quarter of Section Seven (7), Township Nineteen (I9) North, Range Nine (9) East of the Third Principal Meridian. Trustees who signed for the loan were Jeptha Tisdale, George Simpson, John Burnett, James Jones and Robert Ewings. The Notary Public was John Beers of Champaign County. The date of the signing was February 11, I9I3. Boyd Blane was the Recorder of Deeds. As part of a remodeling and enlargement project, a new front entrance, elevated choir loft and balcony were erected. The worship area was also expanded from the basement to an upstairs area, and a six-room Sunday School area was added. The new church was dedicated on August 19, I962.

In March of 1968, a fire started at the rear of the church and caused extensive damage. No clues were found as to the origin of the fire, but there was no reason to assume that arson was a factor. As the city building inspector said that the church was structurally sound, the shell of the church was used as the base for rebuilding. The pastor, Rev. Bishop, was an accomplished carpenter and he, church members and neighboring churches helped with the reconstruction. In the meantime, church services were carried out in the church basement. Among neighboring churches who helped with the rebuilding were local Mennonites. The following article documenting their efforts appeared in The News-Gazette on June I3, 1968:

'Members of area Mennonite Churches have been helping renovate St. Luke C.M.E. Church, which was gutted in a fire nearly three months ago. According to Robert Massanari, a member of the First Mennonite Church in Urbana, the church has a "disaster service" which provides aid in times of crisis. Several members "took the initiative to get it started," and nearly 30 persons volunteered to clear the rubble caused by the fire, and begin rebuilding the inside of the extensively-damaged church, according to Massanari. Volunteers came from the local church, the East Bend Mennonite Church at Fisher, the Arthur Mennonite Church, and the Dewey Mennonite Church. The workers have torn out burned partitions, walls, and floors, removed scarred varnish and started rebuilding the inside of the church. Rev.A.W. Bishop is pastor of St. Luke.'

St. Luke marked the completion of the work with a double celebration which was noted in the following article from The News-Gazette on September 22, 1966:

'Rev..W Bishop, pastor of St. Luke's Christian Methodist Episcopal Church of Champaign, will celebrate his ninth anniversary at 3 p.m. Sunday. The celebration will have a special meaning for the congregation, as it will take place in the recently restored sanctuary of the church. Fire destroyed the sanctuary last March and many members of the church took part in repairing it. Ministers of the Champaign-Urbana area will participate in the program and the youth choir of St. Luke's will be featured.'

PARSONAGE
Records from the Assessors Office indicated the parsonage was built around 1958. According to Rev. O.G. Monroe, Rev. Crowder built it and Rev. Taylor was the first nllnister to live there. Rev. Bishop had two rooms added. Rev. Kennedy added a study and the carport garage The records also showed that before the parsonage was built, the original building at that location was razed. There was no information about any pre-existing structure.

This church participated in a UIUC research project on technology use.  For more on that see Study of UC2B Anchor Institutions' Technology Use