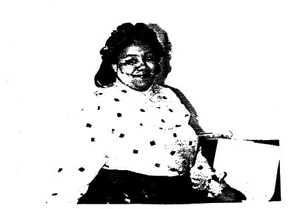 Stephanie Price Hammond is currently Dean of Students at Urbana High School. This biographical information comes from a 1991 publication of the National Council of Negro Women, Champaign County Section.

Stephanie Price-Hammond is a native Chicagoan. She attended Elizabeth Seton H.S. and won a scholarship for 2 years to the Interlochen Arts Academy. From 1966 to 1979 she attended the American Conservatory of music in Chicago, under the guidance of Mrs. Berniece peck. She matriculated at the University of Illinois, but attained her Bachelors of music degree from Clark-Atlanta University in Atlanta Georgia. She majored In Cello and minored in Piano Performance. In 1986 she attended Vanderbuilt-Scarritt Graduate School in Nashville Tennessee. She received her Masters of Sacred Music. Her major was Choral Conducting with a minor in Piano Performance. She returned to Atlanta and began her ministry in Music. She lived and worked in churched in Atlanta for 12 years. She moved from Atlanta, Georgia in 1989 to marry her future husband, John David Hammond Jr. from Champaign, Illinois. She is currently living In the Champaign-Urbana Illinois area, but commutes regularly to Chicago, where she played for the Wesley United Methodist Church. Over the span of her years, Mrs. Hammond has been playing/accompanying people for most of her life.