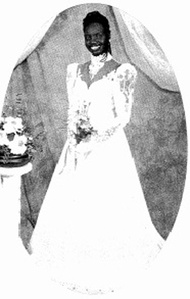 Susan is the daughter of Catherine and Michael Ogwal. She attended Centennial High School where she was a member of the Afro-American club, the Voices of Centennial broadcasters, the Speech Team, the Centennial Gospel Choir, the Interact club, REACH peer counselors, and the basketball team. Her outstanding community service and extra-curricular school activities included involvement on the Express Yourself Teen Talk Show and past secretary and vice-president of Delteens. She also received an Academic Achievement Award from Delta Sigma Theta Sorority, Inc., an Academic Letter and Pin, and was an Academic Honor Roll member. Susan also had Outstanding Centennial Marching Band, Outstanding Sophomore in Chorus recognitions, a Centennial Athletic Award, and was previously named Centennial High School Student of the month. Susan has received numerous accolades because of her outstanding leadership qualities: a Certificate of Achievement in Teen Leadership, the Most Inspirational Marching Band Flag orps Award, the Most Diligent Student in the Principal's Scholars Summer Enrichment Program, the Most Outstanding Student in Principal's Scholars Summer Enrichment Program, and the 1998 "Do the right thing" Outstanding Youth Award presented by the school district and Urban League. Susan was accepted at the University of Illinois and planned to pursue a degree in Psychology. An extremely active member of the Canaan Baptist ,Church, she worked diligently as president of the Youth Choir, treasurer of Sunday school, in the Tutoring ministry, as treasurer of Canaan Youth for Hire Ministry, and a Teen Assistant in Canaan Junior Church. Her escort was Chevis Hemphill. Susan was presented by her father, Michael and received by her mother Catherine.