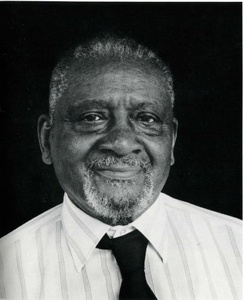 Theotto Bowles: Source "In All My Years: Portraits of older blacks in Champaign-Urbana"

Theotto Bowles joined Salem Baptist Church in 1930, two years after moving to Champaign with his wife, Luvata Bowles. In Champaign, he raised eight children, working two jobs most of his life.

Bowles began work in Champaign running a cleaning and pressing business in the basement of the old Beardsley Hotel, later the Tilden Hall, at Hill and Neil streets. He later worked as a maintenance man at Chanute Air Force Base, for the Eisner and Piggly Wiggly stores, at Christie Clinic and the Champaign City Building. He also sold Mason brand shoes in his spare time. He later became a life insurance salesman and retired in 1976.

Throughout the decades, he has been active in his church, the Masons and the Republican Party.

In 1978 Bowles tried to break ground again in a run for the Champaign County Board. "I lost by 123 votes. That was the end of my po
litical career," he said.

Among his children were: Destin Bowles of Chicago, Theola Murphy of Evanston and Alora Bowles of Champaign.

The following comes from an 1983 portrait of Mr. Bowles:

"Born in Madisonville, Kentucky, in 1900, Mr. Bowles came to Champaign in 1928 to take over his father's shoe shine shop in the Beardsley Hotel. In 1931 he became a custodian and worked at various businesses in Champaign and at Chanute until his retirement. He and his wife raised eight children. One of his sons became the first Black high school teacher in Champaign."