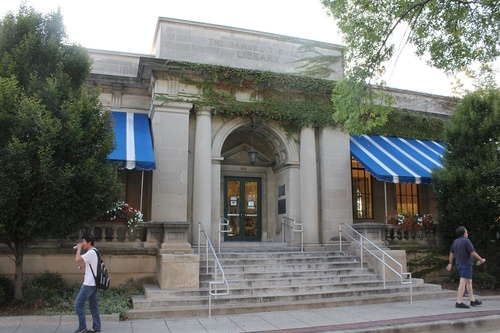 The Urbana Free Library is a very important organization in the Urbana community, providing access to a wide variety of information resources free of charge. In addition to abundant use of IT for staff and administrative purposes, the library makes IT resources available to the public. One of the most important of these resources in the digital age is a computer lab that anyone can use regardless of residency. The policies they have in place for computer use highlight their privileging of patron needs; the reservation system ensures that all patrons have access to a computer quickly, and for as much time as they need so long as no one else is waiting for access. The library has plans in the near future to reorganize and upgrade their computer lab in order to respond to increasing demand and the comfort of patrons. 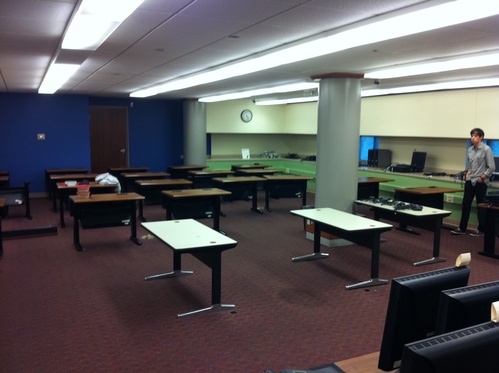 The computer lab space after all the computers were removedIn September 2012, library staff and folks from the Graduate School of Library and Information Science overhauled the layout of the library's Flex-n-Gate Computer Center.  The library's blog featured the story of the redesign and photos of the work involved in building new tables (see article 1 and article 2).

Early founding and expansion of the building. Founded in 1874, The Urbana Free Library is one of the oldest public libraries in the U.S. Prior of 1874, the Urbana Library Association depended on annual membership fees and citizen donations to operate a reading room, renting a second-story room on Main Street. Then it donated its books to the City of Urbana, and they founded The Urbana Free Library. It was so named to emphasize the fact that it was open to all city residents regardless of ability to pay.

The current landmark library building opened on July 18, 1918. It was built with a $35,000 gift from Mary E. Busey as a memorial to her late husband, Samuel T. Busey.

The library was first expanded in 1975 with a contemporary addition. The second expansion, started in 2002 and completed in 2005, doubled the library’s size and represented a complete renovation and greatly improved the building’s technology (Urbana Free Library, History).

The library has been a participant in the Lincoln Trail Libraries System automation system and online public access catalog from its inception in 1981 with CLSI. The system migrated to Dynix in 1993, installed a major Dynix upgrade in 1998, and migrated to the company’s Horizon product in 2004. .  In 2011, Lincoln Trail Libraries System merged with three other systems to become Illinois Heartland Library System, with the eventual plan to merge their automation systems.  In December 2011, The Urbana Free Library and the Champaign Public Library left the LTLS automation system and migrated to a joint online CU Catalog utilizing the automation software of Polaris Library Systems.

The library has experienced all stages of the explosion in public use of computers, the Internet, and online resources, from the early days with just a few public Internet computers and a few electronic resources available on CD-ROM to the present, when it has over seventy-five public computers providing service in all departments and over fifty databases available in-house and remotely, and the circulation of downloadable materials.

In 2006–2008, the library began to focus on telecommunications and infrastructure upgrades, including bandwidth adequacy, network structure and equipment, wireless hot-spot service, and efficient and consistent configuration of public computers through ghosting and volume licensing  The library moved from T1 to fiber access in September 2009 when the City of Urbana added a fiber optic line to connect the library to their facilities and the Illinois Century Network  (Urbana Free Library, Tech Plan).