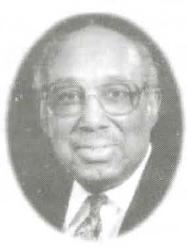 In 1994, Barkstall reflected on his work in Champaign-Urbana. His remarks were printed and digitized. Below are excerpts from his remarks:

Major Influences
Some of my earliest recollections of life center around race. For example, when I was about five years old, we lived in a row of flats on the corner of two alleys. The" street" deadended at a factory where fourteen years later I would get my first full time job. On heavy rain days the drain in the alley would clog, and the low spots would flood. Men in the upper floors of the offices would throw pennies to see us scramble for the coins. One day I caught a "hot" penny whi ch was heated by men in the  "lab" and flicked to the kids below building for five years -- GREAT SPORT. I later worked in that Since blacks were not allowed on the upper floors unless we were specifically directed, I never did get to see that "lab".

Prior to going out into the real world (first grade) my mother told me about racism and how I should act, react, etc ... My mom was a passive, accept life as it comes person. My dad was more assertive. They both taught us to live by the "Golden Rule"; but my dad would insist, "don't fear anyone, and don't let anyone misuse you because of the color of your skin or theirs." My dad taught us, "If you aren't itching, don't scratch." That adage goes back to the days of vicious racism in the South when black males of any age could not look whites in the eyes and talk as equals. Sometimes in feigned deference, but most often out of real fear, black men would look downward and scratch themselves while "yes-siring" and "yes-mamming" white men and women -- some of whom were barely, if at all, out their teens.

I progressed through the various stages of life and faced dehumanizing encounters of racism at every level of interaction with whites. Even up South in Columbus we had separate playgrounds and YM and YWCAs. We had one outdoor pool for all of the blacks in Columbus -- not counting Alum Creek, two good sized rivers, and the deadly gravel pits. After WWII we gradually were allowed to patronlze the downtown theaters, and on Monday nights we could rent one of the "for whltes only" roller rinks where they made more money off the blacks in one night than they often made in a week off whites.

Mi1itar-y, college, and pr-ofessiona1 life did not bring about significant pr-ogr-ess. I came to r-ea1ize that r-acism seemed to have a life of its own which shameIessIy damages the quality of life for the oppr-essor as well as the oppr-essed. Reading and listening to Mar-tin Luther King, Jr-. and Malcolm X convinced me that dealing with r-acism was a 1ar-ger- calling for- me than my fir-st love of teaching. I had to be persuaded by a friend to go to work for the Urban League. Unlike the NAACP, the Urban League gave us poor folk the notion that they were too accommodating to the white powerstructure, and their- wor-ks wer-e primar-ily in the inter-est of better- educated, middle-class blacks. My friend convinced me that there was room for me in the League and I didn't have to ··scratch when not itching.·· So here I am, and as I pr-omised my dad long ago, there has been no scratching wi thout the mandatory itch. Most of you will recall my tornado fight in 1974. Well, I have keloids which itch like the dickens from time-to-time. I can't scratch now without making certain no white person is talking to me at the time. A firm belief of mine is that one who tells whites only that which he or- she thinks they want to hear- isn't worth a darn to blacks or- whites, or- to the cause of racial justice.

I came to town in June, 1966, to help Champaign Countians deal with r-acism here. Before I could settle in, I was faced with a realtor who sold a house on West Clark Str-eet within hours which he had not been able to move in several months. He sold it to an agent on his staff. He did this, after- Carol and I had offered to pay the full asking price for- the house. We finally bought a house on Foley Street. I later learned that the perhaps poorest, least educated man on the street had attempted to organize his neighbors to block our purchase of the house. Right away our advocacy efforts kicked in in quest of systems change. John Lee Johnson and Roy Williams were among the most highly visible activists. They worked alone as well as in concert with groups such as the Urban League, NAACP, Council for Community Integration, Concerned Citizens for Quality
Education, People's Poverty Board, and several equal employment opportunity committees. Petty gangs and general malaise from within, and blatant racism from without wreaked havoc on the black community.
Progressive blacks and their allies were faced with intransigence and other obstacles in every avenue of life. Even the government run job service was blatantly racist in its referral practices toward blacks. It took the presence of Joe Ganns and Ernest Westfield to change referral practices.

Discrimination in housing was a major problem. Both school districts (4 and 116) were defacto segregated at the elementary level and there was heavy sentiment in both communities to keep them that way. The Urbana board was resourceful, yet crass. They shipped the children of voteless foreign students to Hays School (now King), and involuntarily bused black children to underrepresented schools across town. The Unit IV Board was more intransigent and, only under heavy pressure, established a committee which, over my objection, came up with a plan palatable to whites wherein blacks were to bear the lion's share of the burden of busing if they "wanted their children to sit next to whites in school." That philosophy is as flawed and racist today as it was twentyseven years ago. The University of Illinois shared with Chanute and other major employers in town the practice of placing non-job related barriers to employment in the paths of the underclass which was disproportionately black.

Arnetta Collins (now Rodgers) and James Dudley demonstrated in their master's thesis that the medical community in general was not very responsive to the needs of low-income pregnant black women.

Champaign police chief Don Carter has said on numerous occasions that when it comes to racism our community is average at best. He notes further, that the force will reflect the values of the community from which it is drawn. In short, in matters of race our police forces are about average. That is an improvement over the 1960s. My earliest impressions were; that on a mini-scale, local police were about as vicious as those in Columbus, Ohio. Blacks in Columbus were warned "if in danger, call anyone except a Columbus policeman." By 1966 only four blacks had been hired on faculty at the University of Illinois. All others have come since my arrival here. I take no credit for that. In 1966 only one lending institution had popular appeal in the black community. Thanks to John Lee Johnson, the Community Reinvestment Act, and institution leaders -- some of whom had to be brought kicking and screaming to the bargaining table -- the banking climate has changed. Whether praise is due awaits comparative data on services to blacks and their low to moderate income white counterparts. Finally, in this vein, the pastor of one white church that we visited changed his theme in midsermon to make the racial metaphor that "black birds fly with black birds, and white birds fly with white ones." Within minutes after the service an assistant pastor was at our door to tell us that his pastor had sent him to tell us he thought we might feel more comfortable at their sister church in Urbana. Today, things are better for educated middle class blacks; on the other hand, poorer blacks are worse off today than in the 60s and they suffer less hope than the generation a quarter century ago. Their fear is compounded by gang bangers whom
they do not know from their childhoods, and the devastating presence of mind altering drugs.