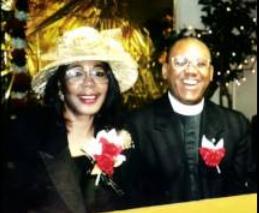 Willa Mae Brown (1954-2010) 56, of Danville, formerly of Champaign, passed away on Tuesday, May 4, 2010, at Carle Hospital in Urbana. She was born Willia Mae Harris on Jan. 16, 1954, in Champaign, to Walter
and Sallie B. Harris, who both preceded her in death. She was affectionately called “Lit” because her eyes seemed to always light up. She was a member of Grove Street Church of God in Christ, before joining St. Luke Christian Methodist Episcopal Church at the age of 12, where she became a well known and an exceptional singer. She was a member and led many songs of the Youth Choir at the Church, the Summer Youth Music Extension Program under the sponsorship of Mr. Dan Perino and Mr. Willie T. Summerville as Director; The Black Chorus of the University of Illinois under Dr. Robert Ray, Dr. Andre Thomas and Dr. Ollie Watts
Davis. She was a member of Gamma Upsilon Psi Society of Champaign-Urbana, who she was a Debutante (1972) and later became a member of the organization. After graduating from Urbana High School in 1972, she was accepted at the University of Illinois, majoring in Music Education with vocal/choral emphasis. She studied music under the tutelage of the late Dr. William Warfield and Dr. Barrington Coleman. She continued her education at Parkland College, Chicago State University and The Institute of Christian Studies, a subsidiary to Oral Roberts University. She also formed various singing groups like “The Bold Soul Sisters,” “The Stimulations,” and “Enlightenment.” She met her soul-mate, the Rev. Roland Brown, at a rehearsal for a community program in the old Afro-American Cultural Center on campus in 1974, and got married on May 19, 1975. They had two children, First Lady Tyra D. Nesbitt and Minister Noah I. Brown, whom she taught piano and singing at an early age. She went with her husband in the ministry and was First Lady and at times the Music Director of Allen Chapel CME Church, Springfield, Ill.; Bray Temple CME Church, East St. Louis, Ill.; Jubilee Temple CME Church, Chicago; St. Luke CME Church, Champaign, Ill.; Allen Metropolitan CME Church, Chicago; Grace CME Church, Detroit, Mich., and Carter Metropolitan CME Church, Danville, Ill. She also directed choirs for the Ministers’ Wives and Widows at the District Conference and Annual Conference for the Christian Methodist Episcopal Church. She was member of the Champaign-Urbana and Vicinity Ministers’ Wives Alliance; St. Louis District Ministers’ Wives Alliance; Chicago District Ministers’ Spouses and Widows Alliance; Chicago Regional Ministers’ Wives and the Ministers Spouses and Widows Alliance of the Detroit District, which she once served as President. She was member of the Women’s Missionary Society as well as all the choirs at Carter Metropolitan CME Church, which she formed the Youth of Promise, as she did at St. Luke. She also sang with the Martin Luther King Celebration Choir in Danville. Willia was employed as an Assistant Librarian at the Chicago Theological Seminary, taught music at the Detroit Valor Academy (National Heritage Academy of Charter Schools), a music and theory teacher at New Freewill Baptist Church in Champaign, Illinois, and worked for the law offices of Attorney Birdie Brownridge-Tucker in Chicago’s downtown area. Recently, Mrs. Brown was a Para-professional of District #118 at Danville High School,
working with special needs students as well as a Teacher’s Assistant. Mrs. Willia Mae Brown was a faithful wife, loving mother, an outstanding singer/director and a kind and generous person. She was preceded in death by her mother and father; sisters, Janie Mae Roundtree and Shirley Miller and brother-in-law, Johnnie Wilson. She leaves to cherish her memory, her husband of 35 years (whom she always will say it is 36 years) Rev. Roland Brown; her daughter, First Lady Tyra D. Nesbitt (Apostle C.D) of Champaign; her son, Minister Noah I. Brown (Gloretha) of Champaign; her sisters, Rev. Dr. Evelyn B. Underwood (Bishop King James) of Urbana, Lela Wilson of Urbana, Jesse Patterson of Champaign, Betty Hill (Johnny) of Bellwood, Ill., Kelly Taylor (John) of Superior, Colo., Maxine Richardson (Edward) of Memphis, Tenn., and Dena Holmes of Chicago; her brothers, Ellis Miller (Brendolyn) of Jacksonville, N.C., and Herbert Miller, Jr. (Tomeji) of Plano, Texas; five grandchildren, Christian Emmanuel York Nesbitt, Nicolas Camden Nesbitt, Glory Imani Brown, Brayden Alexander Nesbitt, Noah Imanu Brown, Jr. and a host of nieces, nephews, cousins and many friends. A Homegoing Celebration was held at 11 a.m. Saturday, May 8, 2010, at New Life Church of Faith, 1419 N. Bowman Ave., Danville. Visitation will begin at 10 a.m. until the time of the service. Officiating: Elder Presiding Harlan K. Jones. Eulogist: Pastor Michael W. McCullough Jr. Interment: Lincoln Memorial Gardens. A visitation was held from 4-7 p.m. Friday May 7, 2010, at Carter CME Church, 448 E. Williams St., Danville.