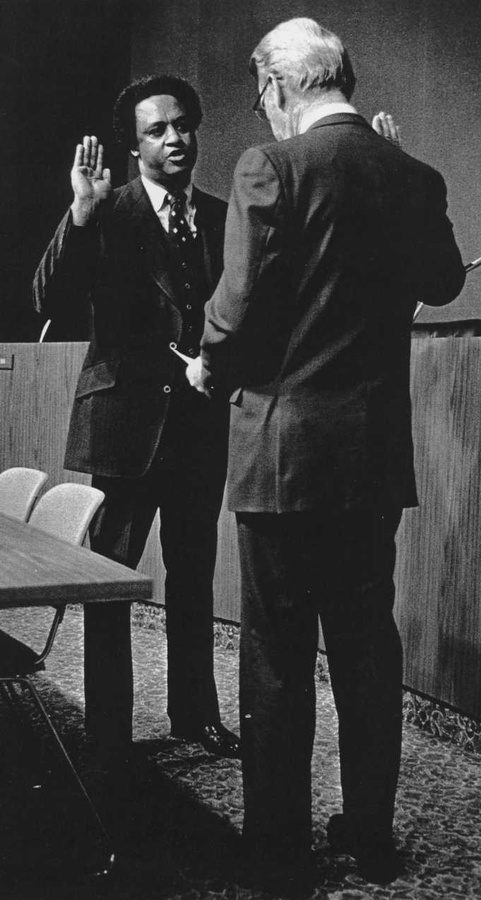 William E. Dye being sworn in as Chief of Police of the City of Champaign. This photograph comes from the Doris K. Wylie Hoskins Archive. Please add additional information about this photograph.

William E. Dye was born April 16, 1933 in Elberton, Georgia to the late Mr. Robert Hester and Mrs. Carolyn (Jefferson) Dye. He had two sisters. Mr. Dye received his formative education in Elberton, Georgia and Chicago, Illinois. He graduated from high school in Elberton. Among the schools where he matriculated were Morehouse College, Atlanta, Georgia; Southern Illinois University, Edwardsville, Illinois (Bachelor's Degree); Sangamon State University, Springfield, Illinois (Master's Degree); and the FBI Academy, Quantico, Virginia. Mr. Dye was united in Holy Matrimony to Ms. Azalee Juanita Biggs on December 31, 1954 and two sons were born to this union, Elliott Hoyt Dye and Robert William Dye.Mr. Dye served in the United States Army during the Korean Conflict. He completed basic training at Fort Riley, Kansas with a tour of duty in Germany. He was a cryptologist and attained the rank of Staff Sergeant, serving from November 1952 until September 1955 when he received an Honorable Discharge. Mr. Dye entered the Illinois State Police Academy, Champaign, Illinois in June 1957 and graduated in August. His first assignment was to District #11, East St. Louis (Edgemont), Illinois. He served 11 years with the Illinois State Police. During this time, he helped organize and became a member of the Investigative Unit. In 1968, he was employed with the Saint Clair County Crime Commission as the Assistant Director. In September 1969, Mr. Dye joined the East St. Louis Police Department as Planning and Training Director. He was appointed Chief of Police, City of East St. Louis, in September 1971 and he continued in this capacity until his resignation on May 5, 1975. Subsequently, he became Chief of Police in Champaign, Illinois, a position he held for the next seven years. During his tenure with the Champaign Police Department, Dye emphasized recruiting minorities and instituted a neighborhood watch program. Dye served as a role model for young African Americans and could often be found talking to groups at the Douglass Center. He also led the charge to build a new police building and wanted it located at First Street and University Avenue. From 1982 until 1987, Mr. Dye was the Chief of Police in Columbia Missouri. Later, he accepted the Director of Security post for Texas Southern University, Houston, Texas. Mr. Dye passed away in Texas on February 7, 1994. Included among the numerous organizations with which Mr. Dye was affiliated were: The Omega Psi Phi Fraternity; The International Association of Chiefs of Police; Illinois Law Enforcement Commission; The Southern Illinois Law Enforcement Commission. He served as President of the Board of Directors of the East St Louis Boys Club and he was a founding member of The National Organization of Black Law Enforcement Executives. During his lifetime, Mr. Dye was the recipient of numerous citations, commendations, certificates and awards.