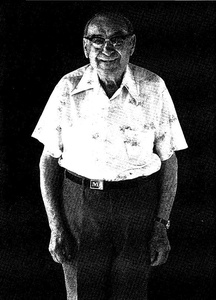 Mr. McClain was born in Kentland, Indiana, in 1900. He died in June of 1984. As he was growing up Mr. McClain's father was a lumberjack and the family moved from camp to camp, eventually settling in Milford, Illinois. Mr. McClain was always interested in fishing, hunting, and farming. During World War II he also owned a small Singer sewing machine shop on Main Street in Urbana. Although he did not believe parents should live with their children in old age because they would be a burden on them, he did live first with his son and then with his daughter after his wife died and his health failed. In the last year of his life, despite serious health problems, he lived each day as fully as possible. He loved pool and taught the game to several other day care clients. He also thoroughly enjoyed a good story and the companionship of friends and family.
He felt older people should "keep going. "Life is as good as you make it."