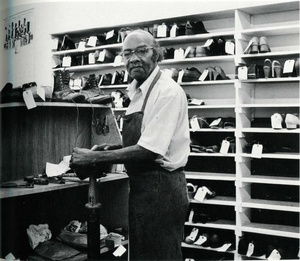 In 1924, when he was twelve years old, Willie Caraway came to Champaign from New Orleans to join his mother. He first worked as a dishwasher, then second cook, at the Inman Hotel. In 1929, after attending school in Decatur, he was employed as a shoe repairman at Brownies Shoe Repair where he worked part-time in 1983. "Everything has changed," he said in 1983 in reference to the twin cities. His strongest memory is of the "Inter-urban on west Church Street and south on Neil Street. I miss it."