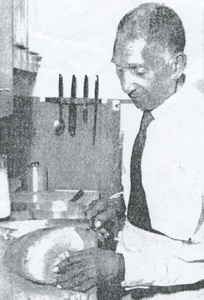 Woodward Thomas was the father of Taylor Thomas.

He was a cook for more than 30 years on the University of Illinois campus, where he cooked primarily for Zeta Beta Tau fraternity. He retired around 1930.

One of his co-workers at ZBT was Lou Gordon, former dishwasher, who went on to become an All-American football player. Gordon was, in 1964, a meat packer in Chicago.

Even at the age of 89, Thomas cooked at least once a day, with his favorite dishes being chili and lemon pie.