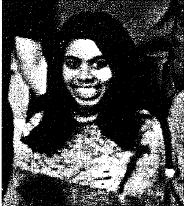 Cheryl White Mason, undatedCheryl White Mason was born in Champaign in 1952 to John and Lucille White. A resident of Carver Park, she attended Booker T. Washington Elementary School and Franklin Junior High School, and graduated from Centennial High School in 1969 as one of 6 class valedictorians. While at Centennial, Cheryl was President of the Afro-American Club, a member of the Biology Club and was selected for the National Honor Society. During her senior year, Cheryl was selected by the National Science Foundation to be one of ten Presidential Australian Science Scholars. This award included attendance at a science symposium in Sydney, Australia and a trip around the world. Cheryl was also selected as a National Merit Scholar and received a National Negro Achievement Scholarship. While growing up in Champaign, Cheryl was a member of Salem Baptist Church. Cheryl attended Purdue University where she majored in Sociology and Anthropology. She received her bachelor's degree in 1972, summa cum laude and Phi Beta Kappa. While at Purdue, Cheryl was actively involved in newly founded Black Cultural Center and was instrumental in bringing to the campus another Champaign resident, Tony Zamora, who headed the BCC for more than 25 years. Cheryl was honored
for her work on behalf of the Black Cultural Center during its 10th and 25th year anniversaries. After college, Cheryl attended the University of Chicago Law School, graduating in 1976. She then moved to California where she eventually became a partner and member of the managing committee of an international law firm, O'Melveny & Myers LLP (a firm headed by the former Secretary of State, Warren Christopher). From 1981-1984 she left the firm to head up a poverty law agency. Cheryl recently left the firm again to become the Chief of Civil Liability Management in the Los Angeles City Attorney's office. She supervises over 100 lawyers and paralegal that defend the City in litigation concerning the police and fire departments, parks and recreation, public works and workers compensation.