For the index to all pages on this wiki go here

RECEPTION TO A RETURNED SOLDIER. CORPORAL WESSELL BANQUETTED BY THE CITIZENS. AN ENTHUSIASTIC GATHERING.

On Friday evening last Corporal Theodore Wessell, who a few days previously had returned from the thick of the Transvaal war, by way of a 'welcome home,' was entertained at a banquet by the citizens of Lue. The convivial gathering took place at Host Thompson's hotel and was of a most enthusiastic character through out. Of course all banquets are sumptuous, but never one more so than this, and the ladies in whose hands it was, were entitled to all the praise bestowed upon them by the banquetters. The proceedings were naturally of a most enlivened character, it takes a banquet to bring out the vocal talent of a place, and it was evident that Lue possessed a deal of this, as music filled the air throughout the festive hours. The speeches were short and sweet, and if one thing is made evident it was that Lue is proud of her boys who have fought for the Empire. It may be stated here that invitations to the banquet had been sent to returned Rylstone and Mudgee soldiers, but only two - Troopers Yarrington and Armstrong, of Rylstone, were able to attend. Trooper H. A. Martin, of Lue, was also present, and regret was expressed that the only other Lue representative, Lieutenant Dowling, was not also present.

Mr. James Martin was the chairman of the gathering, and a new and sensible departure was the non-existence of the customary vice-chairman. The first toast, that of 'The Queen,' proposed by the chairman, was drunk with musical honors.

Mr. W. Ambler then sang 'Sons of the Sea,' the company joining in the chorus in true patriotic style.

Mr. W. Ryan proposed the toast of 'The Guest' ' in a characteristic speech which fairly boiled over with commendation for the returned soldier and all other Australian natives - not the aboriginals of Jimmy Governor type, he said, but the true Australian native, such as the three boys of Lue. Corporal Wessell briefly responded. He recognised his short-comings as a speech maker, and said so. But then a man does not want to be a great talker to be a great soldier. He, however, was glad to be once more in Lue amongst his old friends and companions. He concluded by proposing the toast of ' Absent Friends and Comrades.' Mr. J. A. Puddicombe sang 'Off to Philadelphia' and in response to an encore ' Volunteer.' Mr. W. Ambler proposed 'Our Returned Soldiers.' He said that 12 months ago the Australians left here entirely untried men, but they have proved themselves to be worthy sons of Britain.

Trooper Yarrington, of Rylstone, in responding, expressed his pleasure at being there to welcome an old comrade. Their sojourn in the Transvaal has not been all joy; in fact, it had been very rough, at times too rough, and he was not sorry to be back. There had been times when bullets and enteric were around him, that he considered his chance of returning to Australia very small. He was pleased to see Corporal Wessell and Trooper Martin in the land of the living, and concluded by making a feeling reference to the late Trooper W. Bonner. Trooper Armstrong, of Rylstone, also responded. It gave him pleasure to be there to welcome Corporal Wessell back. The district boys tried to make life as happy as they could at the war. They were a jolly crowd, and were all together until some of them were separated owing to being wounded.

Mr S. C. Young said he had a pleasing duty to perform, viz., to present Corporal Wessell with a token of the appreciation of the citizens of Lue for his services in the cause of his country. Corporal Wessell was loyal, and so was his aged mother, who willingly bade her son follow the path he had chosen. Looking back on history we are proud of the British, but our children will be prouder when they read the history of Greater Britain. They should be proud of the colonial troops, many of whom are wearing honorable scars. Corporal Wessell was wearing a badge of honor - a wound on his arm.

Corporal Wessell briefly thanked his fellow citizens for the token of their regard for him, and emphasized his feelings of gratitude by rendering the song 'Grace Darling,' for which he was loudly applauded. The Chairman proposed the toast of 'The Press,' which was responded to by representatives of the Rylstone Express and Mudgee Guardian (Mudgee Guardian and North-Western Representative, Thursday 6 December 1900, p. 16, http://nla.gov.au/nla.news-article156273184). 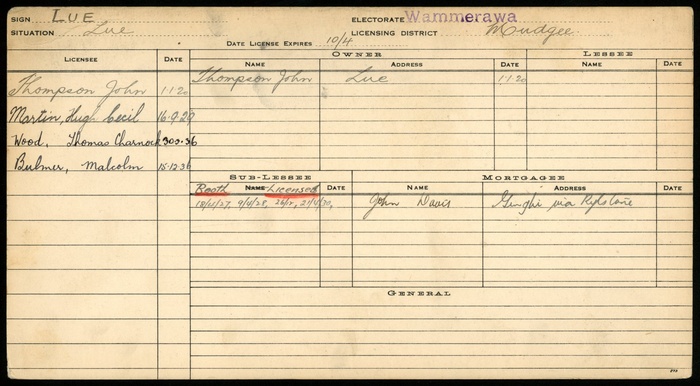