Welcome to the Danville, IL LocalWiki!

A website about Danville, IL that anyone can edit

Welcome to the new LocalWiki region for Danville, IL! 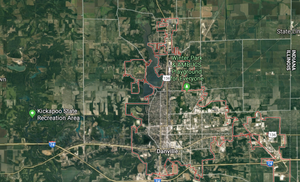 Danville is a smaller city located in Vermillion County in the state of Illinois.

According to Census.gov, the total population of Vermillion County since 2010 is 81,625. Danville's current population is 33,904.

It is a commercial and industrial center in a dairy, farm, and coal area. It is now predominantly known for its agriculture industry which would make sense with the vast amount of farms and crops surrounding Danville. The most familiar and main crops produced are corn and soybeans. Aside from their agriculture industry, Danville has an interesting history including the fact that Abraham Lincoln maintained a law office in Danville for five years. There is a small museum as well as objects and rooms used by Lincoln on display. Another point of interest is the Lamon House which is the house of Joseph and Melissa Lamon, cousins to Ward Hill Lamon who was Abraham Lincoln's law partner and bodyguard.. While the town is relatively small, the community has been working towards making Danville more appealing to visitors and natives. These kinds of projects include renovating the store fronts in downtown Danville as well as renovating the Fischer Theater, which used to be one of the highlights of downtown Danville. Speaking of entertainment and history, there are a few celebrities that are native to Danville such as Dick and Jerry Van Dyke, Donald O'Connor, Gene Hackman, and Bobby Short. It may seem like any unassuming place to visit or live but like any small town it has its quirks and interesting facts that make it unique. 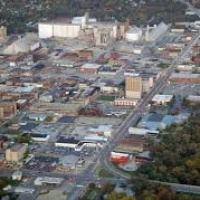