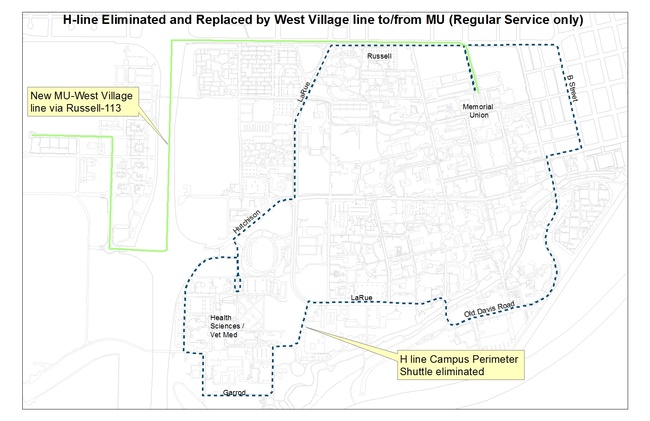 The Proposed Service Change made by the Unitrans Advisory Meeting decided to eliminate the H Line due to it's low ridership. It will be replaced by a new line between the MU Terminal and West Village.  The new line (letter to be determined) would run at the same times at the H-line, twice an hour during “regular service” only (when UCD classes are in session).

Changes will go into effect with the start of fall classes at UC Davis on Thursday, September 24, 2015.

The H Bus Line was a Unitrans route serving the perimeter of the UC Davis central campus via Old Davis Drive and La Rue Drive. It provided half-hourly service between the UC Davis Memorial Union and the Health Sciences Stop in Parking Lot 56.

Note: The H Line does not run during summer or break service. Check out the schedule and route map at the Unitrans website for more information.

In the past Unitrans has had other lines with this name:

Past Destinations on the H Line