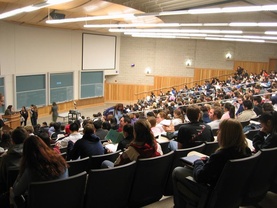 Photo by Paul Ivanov 123 Sciences Lecture Hall (SCILEC; Sci 123 or Sci Lec as most call it) is the largest of the lecture halls on campus containing seats for 519 students. It is located across the street from the SURGE buildings on Hutchison Drive. It's a part of the collection of buildings known as the Sciences Laboratory Buildings.

123 Sciences Lecture Hall was completed in late 2004/early 2005 and was first opened during Winter Quarter, 2005. There are over eight standard-sized chalkboards to be used, and quite a large projection screen.


This building has become the primary lecture hall for lower division chemistry classes, as well as the infamous Nutrition 10, taking away the role from what used to be the main giant hall, 194 Chem. 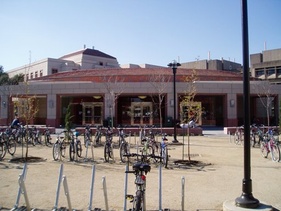 A view from the outside

The hall has been used for theatrical and musical perfomances as well as movie screenings. Add to the list if you know of events that have taken place here!

2005-01-08 21:52:45   Someone should donate a million dollars for naming rights to this building just to put students out of the misery of having to pronounce such a long name. In the meantime, we'll probably call this SLB 123, or Sciences 123. —KenBloom

2009-01-07 01:36:32   Anyone else notice the horrible smell in the Men's restroom? I thought it was just the first time I was in there, but this is my second class ever in that building and it just smells terrible, seems to be coming from the plumbing or something. —mperkel