Measure D was a local ballot measure in the 2012 City Council Election. It passed with 84.1% of the vote.

The text of the measure reads, "Shall Ordinance No. 2387 which extends for six years the existing Parks Maintenance Tax of $49 per year of residential units and on non-residential units in amounts specified in the Ordinance, to fund maintenance of parks, street trees, greenbelts, bike paths, medians, public landscaping, urban wildlife and habitat, swimming pools, and recreational facilities, be adopted?"

Coincidentally, the measure to renew this tax in 2002 was also called Measure D and passed with 79% of the vote (measure letters are recycled over elections; it just so happens that Measure D is the next one in the cycle).

The city has a FAQ for Measure D.

Immediately following the passing of Measure D, the city's tree crew was laid off. As a result, the city will no longer, as of the end of the month, employ any crew that is dedicated to maintain the trees in the areas listed above. 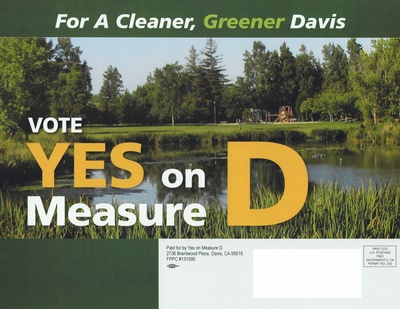 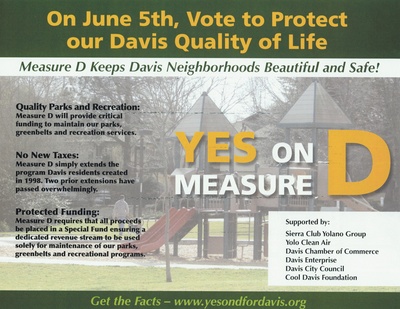