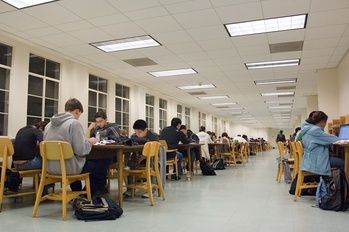 The 24 hour reading room (officially known as the "Extended Hours Reading Room", but nearly never referred to as such) is probably the coldest and most uninviting place to study on campus; however, it is open 24 hours a day. You need to have a valid aggie card to unlock the doors. There's almost guaranteed seating with the rows and rows of tables and chairs and you're guaranteed to not fall asleep with the bright lights. The major drawbacks are how much it echoes and how often other users are not quiet. There are also stations connected to campus internet and electrical outlets so it's laptop friendly too! It does have a group study room and an auditory study room so there isn't a lot of loud talking that goes on.

If you're going to study in the 24 hour reading room I would recommend head phones or some other means of blocking out the echoes of coughs and sneezes.

The previous version of the 24-hour reading room was known as "the Undergrad" (NOT a jr. version of The Grad, which you can find over at University Mall), short for "The Undergraduate Reading Room." It was on the south side of the library, and the staircase leading down to the entrance is still there. When Shields was renovated and the western end of the library was added, the Undergrad was converted for other purposes. Back in the day, the Undergrad was equally as uninteresting as today's version.

Adam Barr, while he was still an ASUCD senator in 2004, made an effort to revamp this room. While carpeting the room (to reduce noise and prevent squeekage of sliding chairs) and adding a clock were discussed, the idea he ended up pushing was a tapestry contest. He suggested that the Art Department gather up a bunch of tapestries made by students, pick the best ones, and hang them in the 24-hour reading room to make it pretty and soak up noise. Maybe the art would also be listed for sale. Authorities resisted, saying that if they had anything valuable in the room they would have to hire a security guard and stuff. Also, supposedly there used to be a clock, but someone stole it. — Eric Talevich

I've never had roommates so I've never actually needed to get away from them to study. That said, I like the 24 hour reading room when I need motivation to do work that I would otherwise shirk off and watch TV. If you come between the hours of midnight to 1 AM, there's a good chance the group study or auditory room will be open. I really don't care if I come alone. Fact is, if people noisy in the main room, I'm not going to respect them by subjecting myself to mindless chitter chatter when there's a perfectly good quiet room no one is using. I like that it's uncomfortable here; it gives me more motivation to get done and go home. — SBS