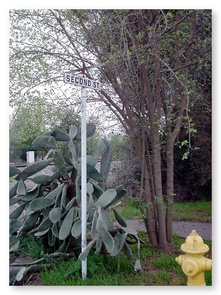 2nd & K Streets—taken in 2005—after the vintage "K STREET" street sign was stolen, but before the vintage "SECOND ST" sign was stolen :-P 2nd Street can be a really confusing street. From the west it starts on A street (at the University Farm Gate), continuing eastward through downtown until it dead ends at the train station. To pick it up again, you need to go north on H Street, hang a right on 3rd Street, and make a right on L Street. After a few hundred feet, L street bends to the left at the L and 2nd Garden — this bend is the eastward continuation of 2nd Street. A short section exists as an access road along the train tracks from J St. almost all the way to L St.

At the East end of town (Mace Boulevard/County Road 104) 2nd Street turns into County Road 32A and extends as far east as the Yolo Bypass Channel. At County Road 105 it crosses the Railroad Tracks and a little further east it transitions from a worn out asphalt county road to the well-engineered concrete roadway of Old US 40.

During the fall of 2010 and spring 2011, 2nd Street from C St. to F St. is getting some modern enhancements. This will include painting of shared use lane markings (aka "sharrows").

Businesses and points of interest on 2nd Street include the following, from west to east: 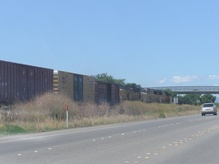 Second Street parallels the train tracks for awhile. Featured is a rare EMD SD90MAC—never common in Davis, extremely rare in 2005 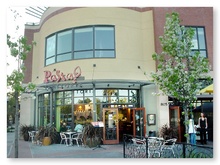 A popular restaurant location, now occupied by Tres Hermanas but formerly Pasta?. sits at the intersection of 2nd & H Streets