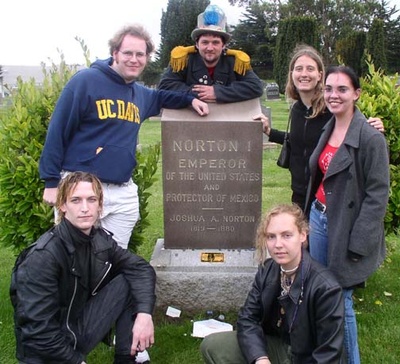 The Gang at Emperor Norton's Tombstone; photo courtesy Emperor Norton III Being that 5-5-05 is the best example of synchronicity with the Law of Fives we've ever seen, the American Brontosaurus Cabal of Davis Eristopia (ABCDE) in association with the Nontheist Church of St. Christopher Discordian took a pilgrimage on this day to the most sacred of places, the grave site of Emperor Norton I. We left around 1:00 and arrived there around 3:00. Ceremonies were held at 5:55PM. By the way, it was a Thursday — the fifth day of the week.

After meeting at the MU around noon or so, we departed for the grave site. The Davis cabal spent about an hour looking for the grave, because asking for directions was less fun than trying to read the Chinese tombstones. Eventually, they all found it. Emperor Joshua Norton III also showed up to pay respects to his forebear. After a short ceremony — shortened due to the closing of the cemetery, we all departed to Chevy's where we found that they were celebrating 5-5-05 as well! We decided that there were too many drunken people there and departed for a Chinese restaurant instead. All in all, it was a good time.

Check out the press this event has received at Discordian Research Technology and The Skeptic Tank.