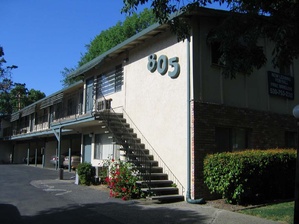 805 11th Street is an older 8 unit complex located on 11th Street between F Street and the train tracks. Units are comprised of 1 and 2 bedroom apartments. As of May 2008, rent for a 2 bedroom/ 1 bathroom apartment is $895/month.

2008-05-03 17:31:16   Two quirky things about this apartment complex: There is no outgoing mailbox so be prepared to mail from campus or at the post office. Also, the complex is next to the H Street homeless shelter (which has never been an issue for me). —AynReyes

2008-05-03 20:09:10   There is a preschool across the street that produces some noise when the kids are playing outside. And the trees somehow fling sap at cars within a three-block radius. But its generally a nice, quiet place, no traffic, close to the Co-Op, close enough to campus. —AllisonEriksen

2008-08-23 21:18:08   I had a friend that lived there at the northern most upstairs unit. The place was okay but King Properties managed it back then and true to form, they ripped his deposit. Does King still manage it? —LouisM

The yard is nice, it is very quiet and a 10-12 min bike ride to campus. —eowynannemcmannis

FAILURE TO RETURN SECURITY DEPOSIT Despite leaving the apartment in better condition than upon move-in, Ally charged us our full security deposit of $500 and an additional $85 in cleaning, repair, and painting. These repairs were on blinds which we reported broken upon move-in, painting which we were very careful to perform touch-ups on nail holes etc. , and cleaning which we had done professionally prior to move-out and provided a receipt to Ally.

FAILURE TO COMPLETE REPAIRS: While living at 805 E 11th we often had no working internet, despite internet being included in the lease (and advertised on the side of the building). The longest outage was over 2 months. We complained often on the phone, only to be told either that the internet was in fact working properly (which it was not), someone was there fixing it (which they were not), or that it was not their responsibility to fix it (which it was). After a snail-mail letter requesting a repair the wireless was restored...for about a week.

The sewage output in our apartment building was not functioning correctly, and we reported this to Ally right away. The problem was visible from the inside as our toilet bowl emptied of water, but more concerning was the RAW SEWAGE flowing up from the drain in the parking area. This happened twice in a week, and we often had no working toilet. During the repair the contractor hired by Ally left our only bathroom unusable, and we had to retrieve the plaster from our toilet ourselves in order to use our bathroom.

After repainting the kitchen cabinets, the contractor hired by Ally failed to replace our cabinet handles for a full month. This created a major inconvenience in using these cabinets, as you had to either leave all the kitchen cabinets open or use your fingernail to pry each cabinet open. Requests for this repair was ignored by the Ally Management office. —MarshallM