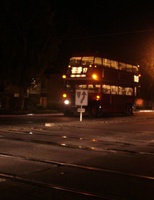 The addresses are not continuous which is a bane to new pizza delivery drivers. So if you live on 8th and are ordering a delivery, be very specific about which part of 8th you live on. 8th is also a good road to avoid police as most police concentrate on Russell Blvd.

8th St, with Sycamore Lane, was added in 1967 as one of the few new post-WWII streets with bike lanes. Then UCD Professor Bob Sommer brought the idea to city planners in the mid 60s. The initial design was a success, and became the standard bike lane design for the rest of Davis, California. At first, bike lanes only went from Sycamore Lane to B Street, then later from J Street to Pole Line Road. The gap from B Street to L Street was too narrow for bike lanes and parking. Eventually, daytime parking was banned, then parking was permanently banned, and now 8th Street is easily the best street to go across town. Had the parkers won a victory in 1970, it would be much more dangerous for bicyclists. 8th Street now has bike lanes for its entire length, and specific bicyclist-operated traffic signals at the intersections with L Street and B Street.