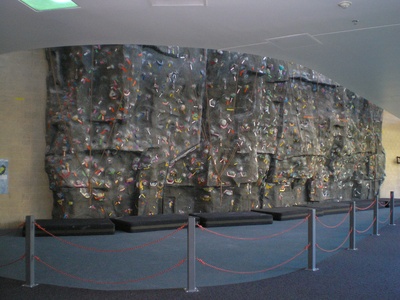 The ARC Climbing Wall is student operated and managed. At any given time, the wall employs around ten to fifteen students, who monitor the wall, teach belay classes, and set routes. The wall works in close association with OA, so if people are interested in climbing both outdoors and indoors, the ARC wall tends to be a good place to meet people involved in the OA rock climbing program. The Climbing Wall generally has a less intense (read: not so Meat Marketesque) atmosphere than the rest of the ARC, drawing more people who just want to have fun. Also, climbing at the ARC is a legal, complementary, and weather-independent alternative to Buildering.

All who have access to the ARC have access to the climbing wall. It does cost money to use the wall, but the cost is low when compared to every other climbing gym in California (for example: Rocknasium charges students a $32 monthly membership charge, and Pipeworks in Sacramento charges $60/month in addition to a $100 initiation fee). The annual fee at the ARC wall is $75, the quarterly fee is $30 or the daily is $5. Payments are taken at the Business Center. front desk. Also, when buying an annual pass, the fee will be pro-rated to the end of June, so most end up paying significantly less than $75.

Once you purchase an annual, month or day pass, all of the gear you need to climb can be rented from the equipment desk across from the climbing wall for no extra charge. They rent out harnesses, belay devices, and shoes. There is a fairly even spread of beginners and experienced climbers that use the wall, and the routes are set to accommodate a wide range of skill levels.

The biggest event at the climbing wall is the annual competition, Cow Crank, which has been a tradition for many years. Cow Crank is always open to the public, and generally draws a fair amount of climbers from around the region.

In addition to Cow Crank, the wall intermittently hosts informal bouldering competitions about once a quarter that are advertised by word of mouth. These competitions are very casual but usually there is an abundance of schwag that gets handed out as prizes for all categories.

The ARC Climbing Wall is a fairly recently-built structure, constructed in 2004/2005. It opened in 2005 and replaced the older climbing wall that existed in northeast corner of the Rec Hall. The original climbing wall was built in the early nineties and managed by Outdoor Adventures (OA). Some time in the mid-nineties, management shifted, and instead the Rec Hall itself gained control. Two years after the opening of the new climbing wall, OA again took over management of the climbing wall, partially because of the merging of many departments into Campus Recreation. The new wall, unlike most indoor climbing facilities, was meticulously sculpted by hand and is composed primarily of fiberglass spread over a complex 3-dimensional matrix, which makes the wall highly featured. It was constructed by the company Entre Prises http://www.epusa.com/

List yourself below! Try these fields: name / your gender / pref. gender of partner / your skill level / your contact

2009-03-31 20:18:54   For those that use it, how do the advertised hours compare to when the wall is actually open? I had some trouble with them being closed when they were supposed to be open a while back. —MichaelAWoods

You should have more hours, thin the crowds. Just a suggestion. —weschrist