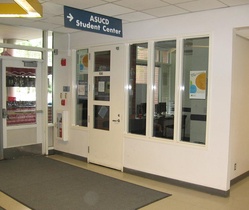 The location of the Campus Outreach office. The location was previously used as a student center, as the older sign indicates.

In Winter 2007, an ASUCD constitutional amendment passed creating the ASUCD Outreach Assembly, which essentially replaced the Campus Outreach and Organizing Office which was disbanded after Spring 2007.

The Campus Outreach and Organizing Office's (CO3 or C3O) office was located across from the bookstore on campus. The office was an ASUCD unit started in the 2005-2006 school year. It was intended to be in charge of campus organizing and outreach for ASUCD but it saw several setbacks in getting its office on the first floor ready so it was not able to fulfill many of its intended job duties.

The ASUCD Student Center used to occupy the small space as indicated by the outdated overhead sign.