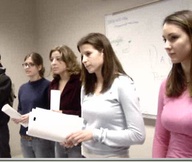 Announcing the winners of the Winter 2005 ASUCD Election The "ASUCD Elections Committee" administers the election process in ASUCD.

The elections committee ensures the smooth and fair administration of ASUCD elections. The committee also coordinates publicity to encourage students to vote and puts on candidate and ballot measure forums to better inform students of election issues.

The Elections Committee hires up to sixty pollworkers for the day of the election. Students interested in working as a pollworker should inquire at the ASUCD job board located on the 3rd floor of the MU.

All voting occurs on the ASUCD elections website at http://elections.ucdavis.edu. For election history, check out the ASUCD Elections page.

Disputes and cases related to the committee are under the jurisdiction of the ASUCD Court (due to the amendment passed during the Winter 2005 ASUCD Election). Elections-rule violations by candidates are decided by the Elections Committee, and can be appealed to the ASUCD Court. These cases were formerly sent to Student Judicial Affairs.

2005-2006 Elections Committee Following the Fall 2005 ASUCD Election and as a result of extremely low voter turnout, the Fall 2005 ASUCD Election/Turnout Controversy resulted. However, shortly thereafter, this was completely ignored when the Unqualified Candidates Scandal blew to epic proportions. The latter resulted in the creation of the humorous, albeit not real, Elections Committee Slate.

2004-2005 Elections Committee The two main mushroom clouds of Fall 04' were the Election Statement Controversy and the Campaigning in Dorms Controversy. In the case of the latter, they abdicated all of their responsibility and instead delegated it to SJA, even though SJA's mandate from the University does not allow them authority over elections.

The 2004-2005 Elections Committee at the time told candidates that they could not campaign before the official start of the election, when in fact, they could. This was determined to be a procedural error by the Campus Judicial Board, with a 7-0 finding for the plaintiff.

At the Winter 2005 Mandatory Candidates Meeting, the Elections Committee failed to bring in any of the requisite government officials required in Section 102 subsection (1) of the ASUCD Government Codes: After this error was brought to their attention by the Friends Urging Campus Kindness, two ASUCD Senators, who were also candidates, (Darnell Holloway and Senate pro tem Sapana Shende) spoke.

The 2004-2005 Elections Committee was also responsible for the Disqualification Controversy of the Winter 2005 ASUCD Election. This involved the removal of a candidate for not turning in receipts, despite the fact that the Elections Committee had personally verified (via phone calls to stores) all purchases. Because of this, and because they were allowed to award 0 to 3 (3 is disqualification) violation points for the offense, many perceived this as an attack on a candidate they did not like. As a result, this action has widely been deemed to have a Shadiness Factor factor of 10.

On January 20th 1994 a group of candidates for the ASUCD Executive Council (which was the Senate before the Senate existed) — Nichole Humphres, Hooshie Broomard, and Adam Young — over-spent during their campaign (by slightly over $10). The Elections Committee refused to disqualify the candidates in spite of the fact that over-spending entailed this (spending $250 is 1 violation point and spending over $260 is 2, as is the case today — 3 violation points is a disqualification and there is no "may" phrase involved in these assessments). The case was appealed to Student Judicial Affairs and SJA ruled that Humphres should be disqualified, and the others let off with < 3 violation points or nothing at all. The Elections Committee had argued that the infraction was so minor that it had absolutely no impact on the election, and that the candidates were not acting with malicious intent. SJA's ruling stood.

On February 17th 1994 the Committee disqualified the ASUCD President/ASUCD Vice President ticket of Munon/Herrera. Herrera had accidentally forgotten to pay her student fees, and had lapsed into non-registered status. Herrera maintained that she was still in all her classes, was not aware that she'd missed a fee payment, and had corrected the error. When the Committee had checked her Reg Card she was a registered Undergraduate, and the slipup had occurred during the campaign.

Rampant controversy subsequent to the Fall 2004 ASUCD Election (see Media Coverage, above) has lead to a number of proposed reforms for the Elections Committee and Elections process. The reform process has been an ongoing process (although at various speeds) with the ASUCD Election Regulations.

The Elections Reform Bill of 2004, better known as Senate Bill #26 was passed as a result the problems seen in the Fall 2004 election. Most of the reforms were suggested by the SOSSS slate as early as November, but eventually over 15 people contributed to the legislation including ASUCD Vice President Darnell Holloway, Senator Rob Roy, Senator Adam Barr, and the entire Internal Affairs Commission.

There was also a Constitutional Amendment passed during the Winter 2005 ASUCD Election that gave the ASUCD Court authority over Elections Committee disputes.

The ASUCD Elections Committee and Creative Media are responsible for maintaining election data for at least one year in case of a vacancy on the Senate and therefore the need to run a Countback Election to fill the vacancy. However, they do not make a habit of maintaining election data longer than necessary. With this in mind, former ASUCD Elections Committee Chair, Jonathon Leathers compiled all of the election data from Fall 2003 (the first ASUCD Election to use Choice Voting) to Winter 2010 and archived it on this website. The website also includes programs to run the data as well as analysis and reports on the elections. Leathers maintains that he will continue to add future election data to the website as well.

2005-03-04 19:00:13   So, if people want the current Elections Committee to be replaced will you also support my applying to be Chair? —JonathonLeathers

2005-03-04 22:46:42   Jon, yes, I will give you my endorsement. But first, we need to get ALL of these schmucks out. I woulda made my case at the last senate meeting, but it was going kinda long and everyone was too busy getting adjusted to their new jobs, so I gotta wait at least a week. I am hoping others beat me to it tho, cuz we really need people who wont mess up as bad as these current committee members... —PaulAmnuaypayoat

2005-03-05 13:37:47   You might face some tough competition. Kahliah Laney is also thinking about applying for chair. Since she's used to drama on a weekly basis, drama twice a year will be an improvement. Oh, and my intelinfo says that none of the current committee members will reapply. —BrentLaabs

2005-03-07 00:31:56   Hey guys, first, is there any evidence that states that there will indeed be a closed session for all of the current members? They need to be held accountable for the bad decisions that they made, and them simply not reapplying doesnt cut it. If we cannot hold them accountable, then this will only leave the door open for more underhanded tactics by future committee members. —PaulAmnuaypayoat