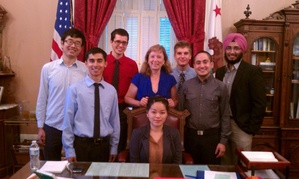 Lobby Corps is an ASUCD unit that researches and analyzes pending legislation and government programs. The goal of Lobby Corps is to influence legislators and government officials in order to promote students views on issues that affect students as well as giving student real world political and organizing experience. Lobby Corps is most active at the California State Legislature. Many Lobby Corps alumni go on to work at the State Capitol or attend the UCDC program in Washington, DC.

Lobby Corps is always looking for undergraduate students to intern or volunteer.

Students can be involved by attending meetings, lobbying visits and other Lobby Corps activities. Meetings are currently held every Tuesday from 7:10pm-8:30pm, with the current location being in the Angelina Malfitano conference room on the third floor of the Memorial Union. Meetings will feature guest speakers, discussions on legislation, as well as training on general lobby techniques.

Please follow the link to our calendar to check out our activities!

Lobby Corps in the News

* From 2004-2006 Lobby Corps was a sub-unit of the ASUCD Office of External Affairs(OEA). Caporusso was the director of the subunit. McInnis was director of OEA and assumed the role of Lobby Corps director during his time. After the spring 2006 OEA, under Darnell Holloway's presidency, was broken back up into its three components of ASUCD City/County Affairs Office, ASUCD State and National Affairs Office, and Lobby Corps. When ASUCD pulled out of UCSA in November 2006, Lobby Corps and ASUCD State and National Affairs Office became the sole state and national representative for UCD students. Even though the ASUCD State and National Affairs Office used to be in charge of ASUCD dealings with UCSA, after ASUCD pulled out, this office for some reason did not know what to do with itself, which resulted in its disbandment. At that time, Lobby Corp became ASUCD's sole state and national representative for UCD students. They also receive a significant portion (roughly $15,000) of the former UCSA funds which are now used to hire a private public affairs firm to provide professional training and research.