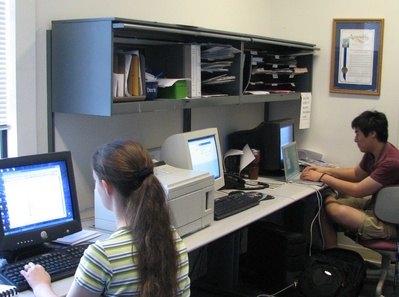 Senate Interns Monica Haymond and Jimmy Mou hard at work in the office of interest.

The ASUCD Senate Office is located in room 354 of the Memorial Union and is usually locked when nobody is around. It also goes by the name of ASUCD Legislative Office.

The purpose of this office is to allow senators, and their interns as well as commission chairs and commissioners, a place to hold office hours, and work on ASUCD business, as well as any of their own personal projects. For the senators' use it has three computers, a circular table, a HP LaserJet 4 printer (as seen in the film Office Space) a new printer which never has any fucking toner, and three maybe working computers (one is found frequently having loose components or being unplugged.

This office is busiest Mondays through Thursdays, during the afternoon, and is practically empty on Fridays and during Senate Meetings. If you want to meet a senator, or leave a message for him or her, going to the senate office would be the place to go. Many students have admitted feeling intimidated by the third floor of the MU, especially ASUCD Senate Office due to its cliquish vibe, thus making the office the hub of the proverbial ASUCD Ivory Tower.

Though this office is mainly for ASUCD senatorial and commission use, CalPIRG agents and involved students (such as BrentLaabs) use this office as well, for generally good purposes (they do yield computers and chairs to the current senators of course. In addition there has been much controversy on the wiki involving many edits made from the senate offices computers, such as those made under the JoeLevy username, however this is usually limited to the drama surrounding the student government and has little impact to the whole of the Davis community.

Presumably only Senators and Commission Chairs have access to the door code but this is not always the case.

As a random note, the place is often a mess as the senators are quite busy folk, and will not have much time to clean up, then again, it is their office anyway. ~DavePoole