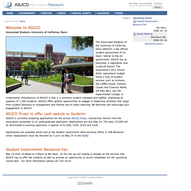 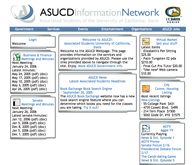 The current edition of the ASUCD website was launched on 2006-05-14, which solves most of the whining below. It always needs work, but it uses Plone to allow many people to edit individual parts of the site — much like an access-controlled wiki. SGAO is now staffed with a webmaster, so hopefully the complaint levels will stay down. Still, ASUCD officials need to tell him/her about the events going on, or they're just not going to be posted.

In the past, there have been a lot of complaints made about the ASUCD website (which is run by Creative Media).

On the evening of March 22 until the morning of March 23 the entire ASUCD network was down. That means the Aggie's website was down as well as KDVS and their online show archiving system.

Another complaint is that documents can not be found on the website - such as bills, the budget, or upcoming agendas for Senate meetings. During the ASUCD Senate of 2005 and onward there has been a push to make more documents available online, but the ASUCD site often featured out of date material even then.

Another complaint is that it is out of date. Case in point: 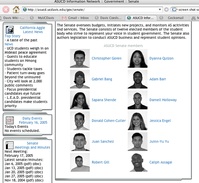 The problem with this screen shot is that there are no documents for upcoming Senate meetings available. The latest document to be put online was three weeks before this screen shot was taken. And the phrase "No Events Scheduled" because this was the day of the Winter ASUCD Elections Forum.

Also, several of the Senators listed are no longer on the ASUCD Senate. The most drastic case would be Adam Barr who has been out of the Senate for almost three months.

In addition to all this. On February 16th, the day this screen shot was taken, there was also an ASUCD Fair going on in front of Freeborn Hall to feature the different units of the ASUCD. The fair would certainly be termed as an "ASUCD Event." 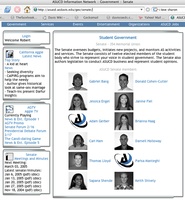 The Senate Webpage has been updated. While this is appreciated by the student body the irony of this happening after the Winter Elections when eight of the senators will be out of office in a matter of days is amusing. But Creative Media is trying and that is a good thing. 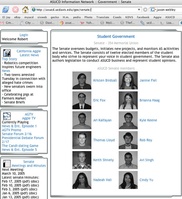 The Senate Webpage is up to date. Creative Media had some great quick response time as they put the new senators photos and pictures up immediately.

The new ASUCD website for Senate Bills is fantastic, I must say. It's so much nicer having descriptions of bills available. Good job, Alex, Kristen, and all the SGAO people.

2005-04-18 02:30:03   The ASUCD is website is down keeping KDVS online listeners from being reminded to donate during fundraiser week. —RobRoy

2006-09-25 19:49:17   Just for note: I'm now an admina former admin for the ASUCD site, so direct non-technical problems (i.e. content issues) to mesomeone else. (I'm an emergency admin only) And not so much to Alex Park, who's generally too busy on days that end with "Y". —BrentLaabs