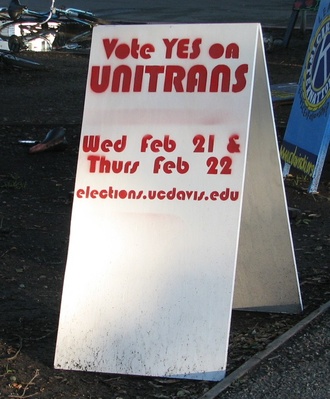 A sandwich board by the MU Bus Terminal

This ASUCD Senate Bill was co-authored and endorsed by Presidential Candidates Kareem Salem and Spencer Higgins.

BACKGROUND: Unitrans, the ASUCD bus system that services the UC Davis student population and the greater Davis community, has endured rising operational costs over the past few years. Without finding additional funds within the next year, it is likely that Unitrans will have to scale down service. This will be the first referendum to increase the operational budget for Unitrans since 1999. A separate increase in 2003 for bus acquisition was approved by student referendum.

Finance: No Appropriation: None Vote: Majority

The passage of this referendum will require a voter turnout equal to at least twenty percent (20%) of the undergraduate student population and at least a sixty percent (60%) plus one approval. For more on these provisions, see “Referendum Provisions” (attached).

If passed, the fees outlined in this referendum will be assessed starting fall quarter, 2007.

Unitrans: This fee will allow Unitrans to pay employee wages at a level that is commensurate with the California State minimum wage increase that took effect on January 1, 2007. Unitrans can not offer the same level service with the higher hourly wages. If passed, this fee will allow Unitrans to maintain the current level of service and to continue to provide unlimited undergraduate student access to Yolobus regularly scheduled services. This fee will also permit Unitrans to replace and/or rebuild its fleet of aging buses according to Federal Transit Administration replacement standards, and to provide advanced information technologies that will enhance the riding experience for bus riders. Finally, this fee will permit Unitrans to develop an appropriate budgetary reserve amount, which has been depleted over the past several years in order to maintain current service levels.

Return to Aid: The undergraduate fee will provide funding to support first those students with the greatest financial need (those who are eligible for support from Pell Grants). Any remaining balance of the financial aid funds will be allocated by the Financial Aid Office based on student need.

*These amounts are in addition to quarterly fees and other future fee changes that may be assessed by the Regents of the University of California or other authority.

Advisory Vote – The outcome of the vote shall be advisory to the Vice Chancellor – Student Affairs, the Chancellor and the President of the University.

Voting – “Minimum voting pools” have been determined in accordance with University regulations. A minimum voter turnout of 20 percent (20%) of the undergraduate student population is required for a valid vote. The exact number of undergraduate students required will be provided by the University Registrar in advance of the election, and will be based on the winter quarter 2007 census data. In addition, this referendum requires ratification by at least sixty percent (60%) plus one for approval.

Life of Fee – This fee does not have an “expiration” date after which the fee is void. As such, this fee will continue in perpetuity unless it is altered through a future referendum.

Adjustment of Fee – No escalator is included in the fee referendum. As such, this fee will remain at $6.00 per undergraduate student per quarter. An adjustment to this fee would require a future referendum.

Use of Funds Derived from the Fee – This fee will be collected in order to maintain existing Unitrans service levels, and to continue unlimited access to Yolobus regularly scheduled services. In addition, this fee will assist Unitrans in replacing and/or rebuilding its fleet of aging vehicles according to Federal Transit Administration replacement standards. This fee will also permit Unitrans to maintain an appropriate long-term reserve balance. Finally, this fee will permit Unitrans to provide advanced information technology systems that will provide operations staff and bus riders with real-time information on vehicle schedules.

Interest Income – All interest income earned from fees generated by this Initiative will be made available to spend on the projects described in the ballot.

Financial Aid Grant Funds – This fee will provide funding available in 2007-08 (and thereafter) of 25 percent of this fee annually to support first those undergraduate students with the greatest financial need (those who are eligible for support from Pell Grants). Second, any balance of the financial aid grant funds will be allocated by the Financial Aid Office based on undergraduate student need

Requirement To Pass: 20% voter turnout, 60% plus one vote in favor.

ASUCD is requesting from you a $6.00 a quarter, $18.00 a year fee in order to keep Unitrans at existing levels. Many of you rarely use Unitrans because you live on campus or live a few blocks from your nearest class. Some of you are already fed up with tuition hikes, pricey books, and living expenses. This will not be the last fee ASUCD will attempt to impose on you. They will come back next year for Unitrans and for their operational budget. Freshmen, you will be amazed by how ASUCD will continue to raise your fees during your fours years here at UC Davis. In order to defeat this fee you need to not vote. A no vote is essentially a yes vote; make sure no one votes for Unitrans. By doing so you will make sure they do not have 20% turnout and then the fee will fail. I am all alone on this one; everyone in ASUCD backs this fee so I am going to need your help. Sincerely,

2007-01-29 20:24:44   Hmm... What about those people who live on campus but do not have cars (ie Freshmen or those who cannot afford a parking permit)? Taking the bus is their primary means of transportation around the city of Davis. And can you provide a stat for how many people live on campus or a few blocks away vs those who are further away? I bet a bunch more people live farther and use Unitrans everyday. I hear more complaints about Unitrans needing to run more busses. Scaling back the service will be all bad. I won't mind paying $6/quarter if that means the bus still comes at the same time and it's not as crowded as it may possibly be in the future. Sorry Steve but you're argument that many people don't even use Unitrans is crap. With over 3 million riders a year, Unitrans needs the financial support. —JoAnnaRich

I hate to come out like I actually support Steve in this (because I don't), but most people in Davis have bikes. I live 2.2 miles away from campus and make the trek on my bike several times a day during the week. It's actually quicker than taking the bus, believe it or not. As such, I've never used Unitrans. Davis is a small enough town that, combined with its excellent bike infrastructure, a city bus system is unnecessary. The YoloBus privileges that comes with our fees are actually far more useful to me as they allow me to get all over Yolo county and provide me with a bike rack so I can ride to my final destination. —WilliamLewis

2007-02-23 14:19:24   Imagine all the people who cram into buses suddenly driving cars or biking to campus. Would all you other people against this measure like searching for parking spots? I hope this measure passed. —TusharRawat