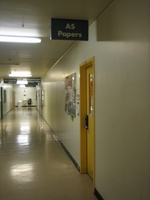 AS PAPERs is actually an acronym for Associated Students Providing Alternative Publications Equal Resources, and served as a forum for students to create and run their own student run publications. AS PAPERs was created as an ASUCD Unit in 1993 following a student referendum. The referendum abolished then Unit, Third World Forum (TWF).

Over Winter break 2005, 30 years of AS PAPERs archives were thrown away by hired movers. The movers had been hired by the University to make storage space for Picnic Day. Many of the archives can still be found at Shields Library.

The Unit has three paid positions including the director and assistant director who are assigned duties to keep the office in working condition, and the Distributor, who distributes the publications across campus. The Director and Assistant Director also make budget plans and ensure those working in AS Papers feel welcome.

In theory, AS PAPERs is comprised of publications that operate fairly independently. But, the staff on each paper shares the office in Lower Freeborn, which houses six computers, a big printer, scanner, and two adjacent rooms; one a filing room, the other storage. The office also has two couches; the larger one is often used for students who don't get enough sleep. Although it has been rumored that students live in AS PAPERs, none actually do, although you may encounter students pulling all nighters working on their publications.

Like many bureaucratic enterprises, being part of AS PAPERs comes with its own set of rules. The publications are supposed to be official student organizations, registered with SPAC. Every publication must read (and supposedly, comply) with the AS PAPERs Admin Plan and sign a contract with AS PAPERs to become an active publication. New implementations for the 2006/2007 year include a required quarter-page AS PAPERs advertisement in any AS PAPERs publication as well as a bi-monthly meeting that needs to be attended by a representative of each active publication. Publications that would like to seek additional funding, they must register and then go through the Club Finance Council. The papers usually use The Davis Enterprise or Kinko's to publish.

2005-06-15 20:48:08   What exactly does AS papers do? Provide a location where the designers can design the paper if they don't have the software? At first I saw them and thought they were a service that helped fund publications, but it seems thats still the creators responsibility. Hmm. I want to create a magazine/publication thing, but I don't know how to get the funding. Somehow I dont think SPAC is going to help. I did find a really neat little pamphlet in the bathroom today, though. It's called "Phlegm Magazine" and appears to only have 3-4 advertisers.... —MichaelGiardina

2005-06-15 21:02:26   It was created in 1993 as a backlash against Third World Forum. TWF was a ASUCD funded paper that went out with the Aggie on a regular basis, and was extremely inflammatory in the "White Man Bad" sort of rhetoric. It so alienated members of the ASUCD (pre-senate) that they took TWF's funding and created AS papers to in theory open it up to anyone, but it was more of a way of eliminating funding for TWF. I have no idea what they actually did, but it did severely curtail the publication of TWF. —RogerClark

2006-07-27 04:14:18   I have been part of the AS PAPERs office for somewhere around a year now, and have had both good and bad experiences. I think it's important to note that AS PAPERs was my first encounter with any sort of serious anti-Semitism. Before working there, the most I'd run into was a bad Jew joke. Generally speaking, the office is comprised of many different minorities, most of whom I have heard express views against Israel. I've seen both subtle to more open hostility to white people and especially white Jews for no reason whatsoever, and I am not alone in observing this. I've seen ASUCD turn a blind eye to this, cloaking it under the fact that AS PAPERs is a "diverse environment". Why yes it is; one that fosters reverse-racism. All that said, I don't mean to overly generallize. There have been quite a few people in this office that have been very kind, not to mention broadened my horizons and beliefs on some very interesting cultures. —SS

There is a Jewish publication, what do you suggest ASUCD should do? —SteveOstrowski

Quite honestly I think there is a lot ASUCD can probably do that it isn't doing. But I think for starters (since I know this is under ASUCD control), you guys should re-consider your hiring practices. I applied for Director around a year ago and Rob Roy told me I did not get the job because other candidates would be better qualified to handle the "diverse" environment. I'm sure the ambiguity of that answer can lead to arguments, but let me just say that everyone else I saw applying for that job were women who were part of a minority culture, and for the past three directors, those are the people who have been hired. Mind you, maybe they were the most qualified ... I don't want you to think I'm bringing this up because I'm bitter over not getting the job. I just think more active scrutiny can be taken in the hiring process. For example: consider not hiring someone who is a member of SJP or Aggies For Israel. A political activist in a minority office that has very strong feelings about Israel would probably not serve well to also be a director.

I'm confused by your comment. Are you saying because we're only one Jewish publication that it shouldn't be that big of deal? Because there are others outside of The California Jewish Review that have expressed concern. —SS

No, I was curious because there is a California Jewish Review which led me to believe there may be balance in AS Papers. For example many conservatives say AS Papers is very liberal but I point out Liberty's Flame. But I see what you mean. —SteveOstrowski

2007-05-07 01:07:37   wow. this page is interesting! i've rarely picked up one of the as paper issues, but the few times i did so i found the articles to be REALLY interesting. i liked how it had both international, national and local issues presented. thanks for existing! —JessicaRockwell