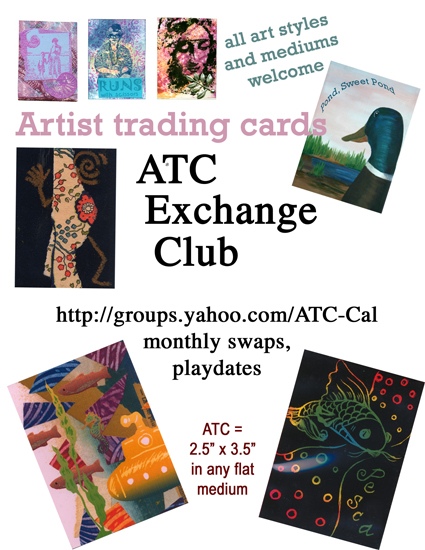 Clubmembers create at a 'playday' meeting.

ATCs can be be made in any style. Here a member uses stamping and collage. 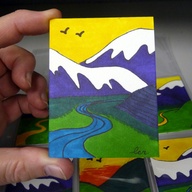 Some folk just draw with Sharpies.

The ATC Exchange Club of Northern California was created in 2006 by artists who had participated in the September 2005 ATC Exchange event. We are open to adding new members — whether experienced or novice artists.

The club (usually) meets monthly to hold trade sessions at various locations in the region. Often there is a workshop, speaker, or 'playday' (time to do artwork together). Most members live in Davis and Woodland, so most meeting happen there. Sometime we meet in Sacramento.

Our group has had a booth in 'Art Space' at the Whole Earth Festival for several years, where we encourage festival-goers to sit down and 'make art' with us — using the supplies we share. In 2009, we added a public 'trade board' so visitors could trade with each other as well as make Artist Trading Cards.

UPDATE @ 2013: We have not held monthly meetings for a while. Although some folks are still active with ATCs, others have either moved on to different artistic pursuits or have had family life demand more time. We hope to hold occasional trading sessions annually from now on.

UPDATE @ 2016: Three trade sessions were held -- July & August at Studio 94B gallery near Woodland, September at the County Library in Davis. Poor attendance means the club is officially dead.

Visitors chat about ATCs at the 2008 Whole Earth Festival booth.