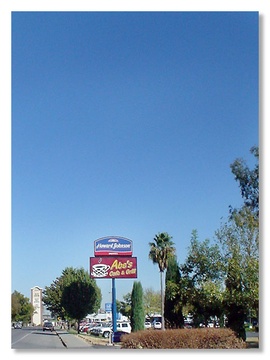 Abe's Cafe & Grill was a diner style restaurant that opened in 2002 and closed down in February 2006. It was going to be replaced by Rock Hard Cafe, but Cafe Casablanca ended up in this location.

Originally this location used to be a Denny's restaurant. Denny's closed down and the restaurant was abandoned for a few years.

2005-01-28 10:34:36   I went once for a late dinner, and it was one of the most terrible restaurant experiences I've ever had. The food, service and cleanliness of the place were all terrible. I like diners, but this one won't get a repeat visit unless a bunch of people say that my experience was a fluke. —JabberWokky

2005-01-28 11:30:13   I've eaten at Abe's half a dozen times or so, right after they first opened. The food and service seemed adequate to me for a diner style place. For a while I was in the habit of grabbing their breakfast special for take-out after working all night. My experiences were decent, but not good enough to keep me coming back long-term. I was also turned off when they made a big hassle about serving me alcohol on picnic day despite me having a valid CA ID. I haven't eaten there in at least a year. —JevanGray

2005-01-28 14:15:23   I went there once for breakfast. It was like every other mediocre diner i've been to for breakfast. Not particularly bad, but too far away for somone w/o a car to make the trek out there. —ArlenAbraham

2005-03-01 18:00:11   This location used to be Denny's. The interesting thing about the restaurant is how amazingly huge it is. They have decent specials, but you really should order food appropriate to the sophistocation of the restaruant.. otherwise prepare to be disappointed. I recommend: Burgers, sandwiches, ham & eggs. —JaimeRaba

2005-04-22 14:02:06   I've eaten a few breakfasts from here, and it's all been pretty decent. Think Dennys — edible, but generally not spectacular. The big omelet thing they have with all the meat and vegetables is particularily tasty. —AlexPomeranz

2005-10-06 18:26:45   wow. I don't think they're too bad. I mean, I usually just get bacon eggs and toast. There the possibility is only that something would be over or undercooked, and I don't think it's ever been either for me. Whatever did you order? —JaimeRaba

2006-01-05 18:04:01   I have been to Abe's twice, because it is so cheap and I had coupons. Still, it's not worth it. The potatoes tasted like they were fried in really old grease. Cindy's is a better option for South Davis breakfast. —KalistaHickman

2006-03-06 13:15:55   You've got to be kidding! (I hope you are.) You know what could be really successful in this location? A seafood restaurant. Because people are willing to actually drive for seafood. —JaimeRaba

Or a 24hr coffee place. It's close to the freeway, and people are willing to bike for 24hr coffee. Also, rock hard cafe? Am I the only one who thinks this is going to be some sort of homoerotic, masculine coffee shop somehow integrated into a gym? — ArlenAbraham

2006-08-21 13:43:03   New owners did a total remodel and Abe's reopened as "Cafe Casablanca" in May 2006. It closed less than two months later. There's a notice posted on the front door from the Yolo County Public Health Department that says the ceiling and air conditioning system are full of mold and need to be replaced. —SteveGreen

2009-07-25 21:29:19   Abe's has been vacant three years now. The empty building is decaying and surrounded by a chain link fence. I wonder what the scoop is? It seems like a good location for SOME kind of restaurant. —SteveGreen