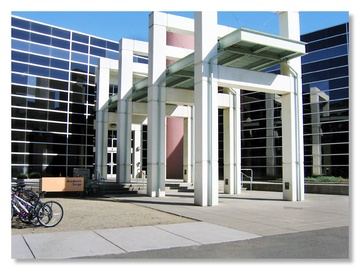 Academic Surge (ACADSR) has the good luck of having one of the weirdest building names on campus. That being said, the building itself is fairly plain, aside from the architect having an odd industrial fetish. Inside are numerous computer labs that highly used by civil engineering students. This is also the building that hosts the Wildlife, Fish, and Conservation Biology department.

Academic Surge is not to be confused with Surge I, Surge II, Surge III or Surge IV.

Academic Surge is located on the south side of Engineering III (which is near Kemper Hall, for those not familiar with Eng. III [which is now called Ghausi Hall]).

This building hosts (at least) the following: