These are archived reviews of Acadian Properties from 2006. For more recent comments, please visit the entry.

2006-02-02 00:46:11   If your apartment has an infestation and they don't do anything about it I believe you are legally entitled to hire an exterminator and deduct the cost from your rent. (look into this yourself though, I'm no legal expert) —ChrisMay

2006-03-09 12:36:48   Acadian is not so much malicious with their renters as blatantly, almost comically inept and rude. Acadian is only great if you can capitalize on taking advantage of their stupidity, mismanagement, poor customer service, and ineptitude, in case you want to "illegally" have pets, extra roommates, sublease your place, etc. If you call about something other than maintenance, don't ever, ever expect a call back. They will throw every excuse at you, and they will steal your security deposit. Expect it! Threaten them & they back down, but they are liars. Or just dumb. They must have a "disgruntled renter phone spiel" posted by every phone to deflect anything you might say. Don't expect any understanding or even comprehension by the droids that work there. I almost feel sorry for this company & the wankers working there, except they probably turn a profit. So house-owners, beware too! They are doing everyone wrong in this town. —TussenTak

2006-04-12 09:43:48   I've rented from them for a while and although I've had my gripes they haven't been too bad. I'm not very happy that they aren't flexible whatsoever about move-out/move-in dates even if you are willing to pay for additional days. I'm in a situation, like many, where I am moving out of my small apt in a few months to a larger one about 2 miles away also managed by Acadian. I have no place to live for 3 days and will have to store my stuff in a U-Haul and live in a hotel for those days until we can move in to our new place. That's a pain... However, they have been more attentive to problems than the previous owner of the complex I am currently in and are upgrading things. —HollywoOd

2006-05-04 23:56:47   Our place is infested with roaches and I don't call because I know nothing will be done. It will be "my problem". So I went to ACE hardware and spent my own money to buy bug deterrents. I wish I would have known as I have a horrible phobia and can't wait to move out in four months. —SummerWaters

2006-05-05 00:04:07   These people should be your last resort when renting property. Joe is so rude. I told him I was coming in to sign my lease and he should expect me at a certain time. When I walked in the person who was sitting at the front desk and announced I was there. He basically ignored me for about 25 minutes while he listened to music and did other misc things at his desk. The person then reminded him again, I was there to sign my lease and he abruptly says "anyone in here can help her". To boot we could move in until the 2nd so we had to stay in a hotel and couldn't get our keys until five, BUT WAIT not until the fax from PGE came confirming service in your name. WTF????? Horrible and cheesy. Never seen anything like it —SummerWaters

2006-08-15 23:34:38   Hi - can anyone tell me if Acadian is still as bad as it was in 2005? I am about to rent an apartment from them, and my experience has been negative thus far. Unfortunately I have already handed over rent, but not signed a lease. These stories seem too bad to be true - but they check out with the BBB. Can anyone who is living somewhere managed by them now tell me a little more about how bad it really is? —MoSto

2006-08-16 07:27:46   These people are simply dishonest and should not be in business. However, if you do rent from them you must protect yourself. Take lots of pictures when you move in and take lots of pictures when you leave. They will attempt to take as much of your security deposit as they can and you must be prepared to fight them. The pictures will help, actually a video would be best. If you see problems going in make sure to write them down and have someone else view the problem just in case you need a witness. Get signed receipts. —SteveHayes

2006-09-05 23:47:33   These people were absolutely RUDE to my sister and her roommate. They refused to let her move in even three days after what was agreed on her lease contract. They paid a ridiculously high amount for the security deposit (around $1,100) on a dumpy apartment on Drake Drive. There were no screens on her windows, her doors wouldn't open properly, her electrical configurations and lightings were totally off. I don't know how they still manage to stay in business with such crappy service and attitudes. —MindyYang 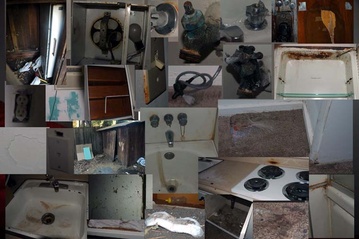 Rust hued apartment. Note the Evil Knievel style plug above the center of the image. 2006-11-02 02:08:25   If my experience is the norm for Acadian, they've made an art out of slumlording. Prior to moving in, we were told that the previous tenants wrecked the place, but that they would renovate it, change the carpet, and repaint a few of the rooms. They steam cleaned but didn't change the carpet, and that seemed to be the only thing they cleaned. They didn't bother to clean the bathrooms, the toilets, the floors, the sinks, the spilled flour in the cabinets, the garbage from the backyard, or the used maxi-pad from the dilapidated shed. The outlet covers were loose or non-existent, there were only two 3-prong outlets in the entire apt., the air conditioner's cord was shoddily taped with electrical tape into some kind of a weird cross, the air conditioner dripped water on anyone walking in the front door, the faucets shot water toward the ceiling, the dead bold looked as if it had been kicked in, the countertops and sink were cracked, the medicine cabinet was covered with rust, the screen doors had gaping holes, and there was a gaping hole in the bathroom ceiling from previous water damage. Mildew seeped through the fresh but shoddy paint job above the shower, and there were enormous cracks even in the recently painted parts of the apartment. The refrigerator's settings caused milk to spoil on one setting, and froze our food on the next lowest setting. The stovetop's coils were at extreme angles, and constantly popped out during cooking. The drawers were made of shoddy materials, and some fell apart after a few days. The front door was so flimsy that the door jam split down the middle when some neighborhood kids kicked on our door as a prank. They ignored out initial complaints for days until we showed up to their office with photos of the disgraceful state of the apartment, and they sent two cleaning people for surface stuff. It took many more days before they painted the bedroom they promised would be painted upon move-in. Maintenance people stopped by on multiple occasions to "measure things," sometimes the same thing on two occasions, with little effort to actually fix anything. After 30 days they had addressed only a fraction of our complaints, and belittled us by claiming many to be superficial in nature. When we threatened to get things fixed and deduct the cost from our rent, they asked us if we'd prefer to get out of our lease instead, a suggestion we took them up on. If you decide to rent from Acadian, make sure they let you see the apartment ahead of time, get everything in writing, and be aware of your legal rights as a tenant. And if you find their cheap rent too tempting to pass up, consider how much it will cost you to move out should things go awry. —CraigBrozinsky