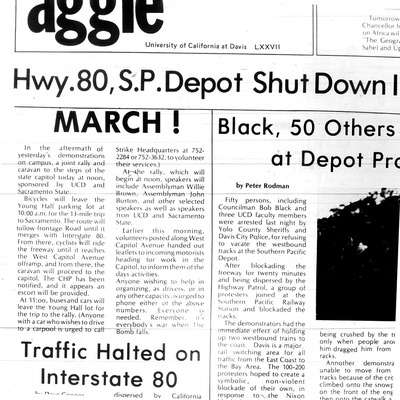 There were exceptions to the quiet activism found here in the 70s, as this 1972 California Aggie shows, with Davis residents shutting down I 80 and the Southern Pacific Railway to protest the Vietnam War. "Remember, it's everybody's war when The Bomb falls.

For a University town in California, is there a lot of activism? Decide for yourself by getting involved as an activist or attending a protest. There are many community organizations, some of which are political and/or activist groups, and also student organizations which may or may not be activist groups. Also check out the local environmental organizations. Keep in mind that not all activism is good. Before getting involved with a group make sure you understand the group's effects, history, and actions. It may be that some groups are better fit for you than others are.

In the 1960s and 70s, activism was prevalent in American society, as old social norms were challenged, environmental conservation became urgent, and the Vietnam war was killing thousands of Americans every year. Davis had its own brand of activism—based on dialogue and negotiation rather than confrontation and militant activity. Activism peaked in The People's Republic of Davis in the early 1970s when a group of civic activists was elected to city council, and Davis became a leader in energy conservation, recycling, composting, and other civic roles now commonplace.

Of course, individuals can make their voice be heard from their own home. ZacharyNorwood has written letters to the City Council regarding the Davis Food Co-Op.