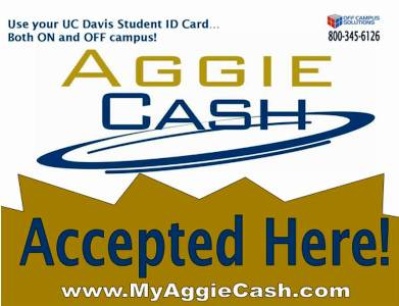 The Aggie Cash account was located right on the UC Davis ID Card and was used by students, faculty, and staff. Aggie Cash was used to pay for food at popular (and heck, even unpopular) restaurants on and off campus. You could have deposited any amount of money into your Aggie Cash account. It saved about 10% at certain places (mainly on campus) and most of the time did not get charged sales tax.

It was formerly known as the Off Campus Meal Plan. It was a re-branding for Munch Money.

IMPORTANT UPDATE: After the 2013-2014 School Year the off campus aggie cash program ended, meaning that no off campus vendors accepted aggie cash, after June 13 2014.

The off-campus network of Aggie Cash was discontinued on June 13, 2014. Click here for frequently asked questions about this program change. http://dining.ucdavis.edu/myaggiecash/MyAggieCash/myaggiecash.com/documents/AggieCashFAQ_Final.pdf

To add money to your account you had to go to the:

The list of participating on and off campus merchants

For history's sake, here is a list of past participating merchants

12/11/07 Is this page really up to date? I have a meal plan and occasionally convert swipes to aggie cash; I went to pita pit once and they would not accept it for whatever reason, I think woodstocks did the same to me too. An up to date page on currently accepting eateries would be nice. -JeffreyOropeza

2008-12-07 17:24:23   aggie cash at the subway by the train station has a machine that doesnt work according to the guy there anyways too. But you can get discounts places with aggie cash, so its different than a debit card —AnnaF

If there are any changes needed to be made, please make them. —BmetalV