The Aggie Student Store carries food items and does not carry bluebooks OR Scantrons. Fortunately though, you can find these things and many others located at The Corral right next door!

The Aggie Student Store (ASS), is an ASUCD unit and is a good place to pick up quick food on the go, they have soft pretzels, cinnamon churros, popcorn, as well as bottled soda and individual fun size candy for 10-25 cents.

The Aggie Student Store also has an extensive beverage selection ranging from tooth-rotting elixirs to organic mood-lifters, and also carries some healthier choice items than you might not expect to find in similar convenient stores, because we also have a bulk candy and trail mix section, energy drinks galore, ICEEs, and currently include inventory from over 10 food and/or beverage suppliers. For instance, the supplier that stocks the Co-Op also stocks items for our store. Thus, the store attempts to provide for the many different communities on campus and has built a reputation for supplying a wide variety of products with a price range to match. 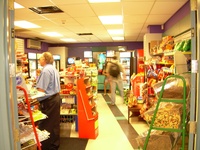 Photo by Mike Tucker NEWS FLASH!!!! - As of spring quarter 2007, the ASS will be carrying all types of KDVS merchandise: T-shirts in all colors and sizes, "KDVASS" women's underwear, stickers, buttons, bottle openers, and records from KDVS Recordings. 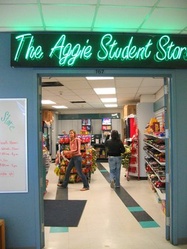 The Aggie Student Store is back and better than ever folks! Come in and see our new wide selection of healthy organic alternatives, quick meals, Coffee House baked goods, an immense assortment of beverages, as well as the typical indulgences you would expect to find at a convenience store - including four flavors of ICEE goodness, nacho cheese and chips, super pretzels, even an entire wall of penny candy! We are located on the first floor of the Memorial Union between Classical Notes and the Corral, which are both adjacent to the bookstore. So if you're in the neighborhood, stop on by. We have a world of selection, conveniently located in a bright, clean, however small, corner of the University. Hopefully we will see you soon, Sincerely,— The Aggie Student Store

2007-02-25 16:46:27   THE ASS IS FUCKING AMAZING. I love the people who work there and they have amazing selection of food. If you're looking for junk food, I'd highly recommend the ASS over the Corral and the CoHo. —EmilyTung

2007-03-16 01:11:11   The A.S.S. needs to be open later in the day. It's often that I find myself wanting one of the many delicious treats only offered in the A.S.S. past 4pm so I make my way down that corridor and no dice, they are closed. I must wait for another day. Yet on that day, I once again find myself standing forlorn outside after 4. —KirstenOnell